From Raven's mouth - Ups and downs in Native language news 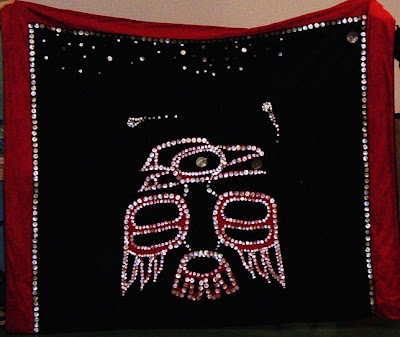 Yea! First thought when I saw the headline in the Juneau Empire about the Sealaska Heritage Institute's language revitalization efforts. In recent years, I've been noticing an awesome push from SHI - and Southeast in general - for language and cultural programs, education and emphasis.

The article doesn't goo too in depth with what the specific methods are, but I have a bit of an idea. I was happy to discover that my OWN Tlingit teacher, the woman I learned (part of) the traditional Tlingit introduction from (it's LONG guys... seriously long...) subscribes to this.

See, for the first month of class, we barely looked at words, we just did sounds over and over and OVER. We repeated everything she said, in this crazy order she wanted done. She wasn't really concerned about us getting the textbooks at all - some never did. For the first month, seriously, I questioned her teaching style, and whether any of us were going to learn anything.

After a month, she suddenly began teaching us sentences - not short, little words - she went straight into the introduction, a good 15 minutes if you're doing it right. And... we got it! By doing things her way, it literally got drilled into our heads to correct pronunciations, order and inflections. We could then more easily "self-teach" because we had the groundwork already.

I'm not even totally sure how she did it, but by not doing things the way you're taught you're supposed to do them, we got it. It's been a few years, and I can still rattle off this long introduction with no problem.

The article mentions a few against-the-grain kind of teachings that I can see how they would work:

"One of the difficult things is to convince people to not use the printed form too soon," MacDiarmid said. "A lot of people were trained in literacy, and so there's this inclination to introduce the printed form of Tlingit, Haida and Tsimshian to the kids early. And in this process we are trying to pull them back from that."

It was interesting to me to read this literally minutes after reading about the continued struggle in the Bethel area to get the language voting help, and the ugly comments about Native languages that always follow stories like this in the ADN. I wish people would actually take a look at the numerous studies to see what multiple languages and cultural relevancy does for a child's education.

To me, this SHI curriculum looks like an incredibly smart mix of Western idea and traditional teaching. I've written recently about the "either/or" mentality of one is good, so the other must be bad. I love my culture, and hope it will thrive for another ten millenia, but that does not also mean I can't see what other cultures bring to it.

A friend once compared cultures who must meet as a marriage. In a marriage, if the two people really come together "as one," some things will certainly be lost. But what you gain in the meantime is something very beautiful and strong also. But if the couple comes together with each determined to not give an inch of themselves to the other - call it compromise, joining, whatever - much is lost. Not to mention a pretty bad marriage.

P.S. The above is a picture of my button blanket I use for dancing. Sometime I'll tell the story of it...
Posted by Writing Raven at 9:51 PM