Will you be my Tsimshian Valentine? 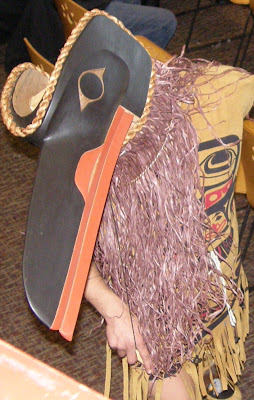 I trekked over to the Alaska Native Heritage Center this beautiful Valentine's Day, as they were having their annual celebration of Alaska Native civil rights. Monday is Elizabeth Peratrovich Day (I'll be explaining that tomorrow!) and the Heritage Center once again brought up the Tsimshian dance group Git Hoan from Washington.

If you get a chance to see this group, GO. They are a great example of traditional culture adapting to modern society. And they're GOOD. Really good. The leader is David Boxley, a master artist originally from (new) Metlakatla, Alaska. Boxley was one of the key people in this wonderful revival of Tsimshian culture in Alaska, and now the world.

The pic beside this is a close up of a raven mask. Boxley carves most (if not all) of the group's masks, half the reason to go see them! 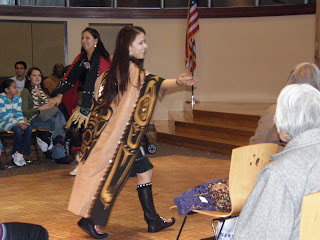 One of the dances they did seemed so ironically appropriate for Valentine's Day. These pretty women represent the evil land otter spirits. In Tsimshian culture, the young men will see the land otters as pretty women, and young women will see them as handsome men. So the women here are giving their "come hither" hands to the audience, and to groups of hunters, and even a shaman.

But at the select moment... 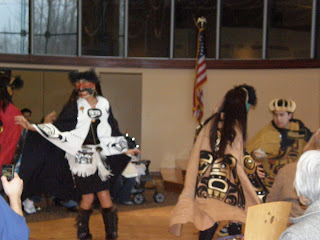 They turn into the evil land otters, and take the hunters back to their cave! The dancers slip on the masks to represent the transformation. It is definitely a dance you have to see in person. The hunters especially really ham it up when they get (willfully!) caught by these pretty young ladies. 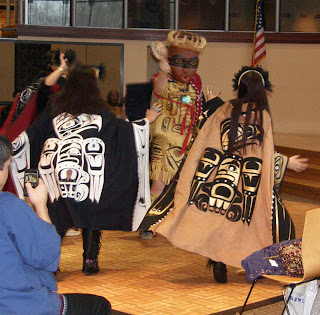 But then a very powerful shaman comes along... 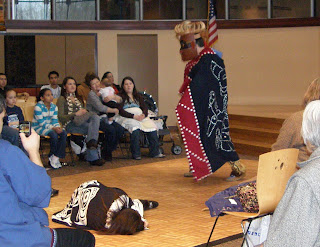 And they are defeated.


Tlingit culture has similar monsters, the Kushdakaa. They are also evil sea otter spirits, and are the ones responsible for all the lost hunters at sea, among other things. I'll tell you, I grew up hearing about them, and you don't generally put much stock in them, as far as being afraid.

That is, until you are around a fire on the beach at night with a bunch of other Tlingit, Tsimshian and Haida people all talking about what silly stories they are. Then you start hearing noises, and all of a sudden you're a believer... 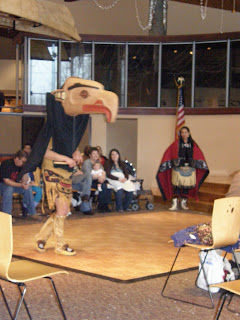 One of the things coming back in Northwest Coast culture is transformation masks, and Boxley is one of the best at it. For most of the song, you're just impressed with this great big mask this guy is hauling around. Then... 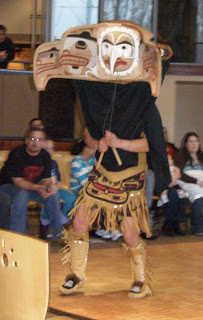 As they said during the performance, for as "theatrical" as they get, this is all traditional. They used to have some really crazy ways of doing masks and things that moved, or were just huge. 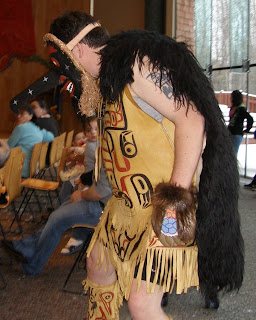 Another audience favorite was the story of Mouse Woman. Here, the evil cannibal giant is roaming around.... (He really frightened one of the children in the audience!) 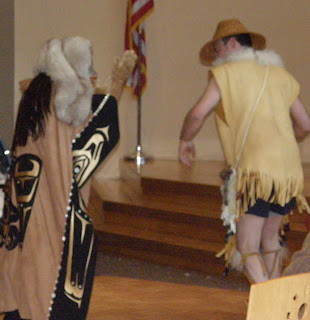 Wise Mouse Woman tries to warn the hunters, one by one, of the evil cannibal giant, but they are foolish, and do not listen to her. The giant kills and eats them.

Boxley: "Mouse Woman knows what men will do." 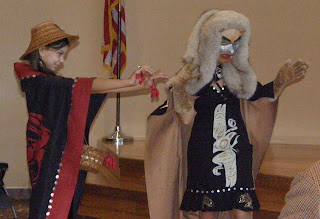 But this girl is wise, honors Mouse Woman, and listens to her advice. When the evil cannibal giant comes for her, she is prepared, and is not killed.

Just one more story of girls rockin' the boys... :) 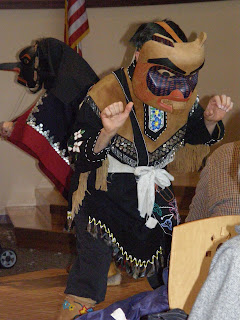 Here is Boxley performing the "Spirit of the Potlatch." I thought it quite appropriate.

See, the Tsimshian people of Alaska were "immigrants" of sorts to Alaska. They moved from "old" Metlakatla in British Columbia to "new" Metlakatla following a missionary, Father Duncan, in the late 1880's.

Part of following him meant giving up culture, giving up the old ways, old customs. There were no potlatches for nearly a hundred years (though there were some "underground" ones.) In the 1980's, Boxley put on the first Tsimshian potlatch, and has been instrumental in the remembering of this culture. 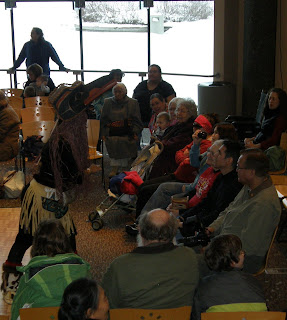 One of my favorite dances - the Raven song. Besides being a beautiful song, these three ravens move just like ravens, and at a certain point in the song they all raise their beaks and click the moving masks like ravens do.

The first pic in this post, above, shows the close up of the masks. 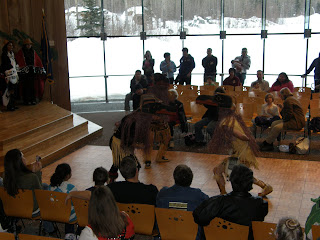 The Tsimsian people have four clans - Raven, Eagle, Wolf and Killer Whale. All Tsimshian people belong to one of these clans.

In the Tlingit culture, we have two "moieties" sort of like the Tsimshian clans - Raven and Eagle. The Canadian (interior) Tlingits have a little bit different system. All (Alaskan, anyways) Tlingits belong to either the Raven or the Eagle moiety, and then each belong to their mother's clan after that (dozens of them) and then come the houses and crests.

Guess whether I'm Raven or Eagle? :) 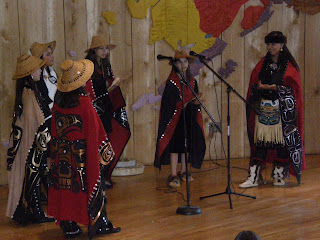 This was a beautiful song by the women, no dancing, no drums, only their voices and little clacker-rattle type things. It's called, "Our Hearts Are Happy." I still have it stuck in my head... 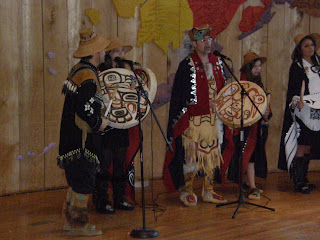 David Boxley (pictured in the black and tan on the left):
"It's the culture, it's the feelings in our heart, why we're here, and why you're here. We're all doing the right thing." 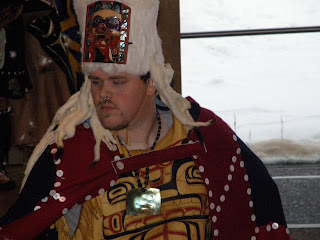 Davie Boxley, David Boxley's son. I think this guy is going to be a real powerhouse in Alaska Native culture. Here he performs the Chief Headress Honor Song to open their performance. 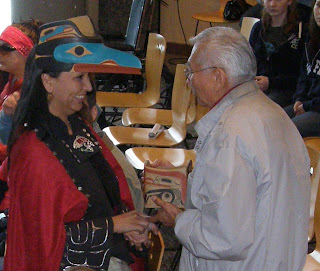 A local Tsimshian Elder, Frances Haldane, is honored, and given a gift of a bentwood box full of eagle down. 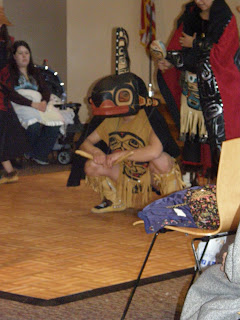 Another of the beautiful transformation masks. Boxley encouraged the audience to use their imaginations with this killer whale song, and it really is beautiful. Part of why this group is so successful is because they really do things the old way - moving like the animals they are representing. You feel like you're watching a pod of killer whales during this song. 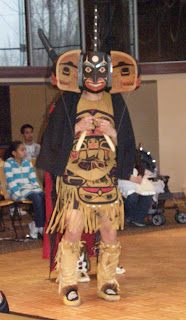 
Below, their traveling song, before they leave... for the first time! They got encored. Or rather, the crowd shouted "Git-Hoan! Git-Hoan!" until they burst back in. And I mean burst! It was no subtle encore. The encore song was a song all Southeast people could get into. It is regularly used as the Entrance to Celebration in Juneau, where literally thousands of dancers gather and parade through downtown, singing it ("Haa, haa hawei! Haa, haa HAWEI!"). Half the crowd was singing along with them, and we would have stayed longer, but Boxley ended that notion. "No more - I'm tired!" 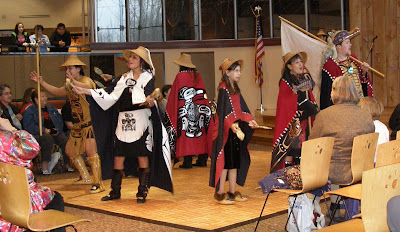 Posted by Writing Raven at 2:39 PM

Nice post and nice pictures. Your mentioning the Kushdakaa brought back the memories of reading Garth Stein's "Raven Stole the Moon", which I (among other books) discussed in my master's thesis on Alaska Native Literature almost a decade ago. Thanks for sparking that little trip back in time. Looking forward to my next trip to Alaska.

Looking forward to my FIRST trip to Germany!

That entrance/encore song is the one we all learned in grade school(Juneau in the '70s) way back when. It rings in my head 30 some years later. Thank you for sharing your photos and stories, the transformation masks are amazing!