Fact Wars by Joe Bedard: Once upon a corporate America... 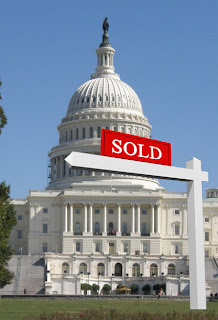 I'm introducing a new, regular feature on the blog, a guest post by a genius political Alaska Native man (a.k.a. Joe Bedard.) He is the rare sort of amateur political junkie that comes to his views through fact, and I'm looking forward to sharing what I've had the privilege of learning from (and debating with) him! - WR

Once upon a time in America. There was a corporation, created by a charter, granted by government and held by private shareholders. Human shareholders. The Corporation was property. These humans were granted rights, guaranteed to them by the U.S. Constitution and Bill of Rights. The Corporate entity had no rights and was barred from petitioning the Government that had created it.

Then, through a series of Supreme Court rulings starting in 1886 and ending in 2009, Corporations were granted legal human status with full Constitutional rights. But unlike their newly found flesh-and-bone brothers and sisters called humans, the Corporation does not die of old age nor does it need to eat. It only needs money to sustain itself and money it can get in abundance.

Posted by Writing Raven at 4:28 PM