The Wrongly Convicted: Looking at my own prejudice

I confess - I still have a lot of prejudices. 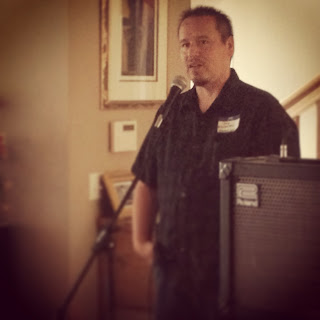 For my part, the imprisoned were just not a group of people I cared to... well, care about. I knew, logically, that people were certainly put in prison who did not deserve it, and even put to death. But that was somebody else's fight. I have plenty of my own battles, and I chose not to care about that particular one.

But if I am being honest with myself, it has nothing to do with why I choose not to get involved in so many other causes. It has everything to do with how I feel about inmates.

So a few weeks ago I was invited by someone I respect (the only reason I went) to hear Ted Bradford speak. Bradford, who has an American Indian heritage, was convicted for a terrible crime he didn't commit. Ten years later, he was freed and eventually exonerated because DNA evidence showed he didn't do it.

I heard him at a fundraiser for the Alaska Innocence Project, something I've known about but could have cared less to get involved with. Because who really cares about this topic anyways?

Obviously - this is the point. Because there are a lot more people like me out there who take an apathetic (or worse) attitude toward the wrongly convicted, it is almost impossible to raise funds, draw attention or take on the monumental task of proving something that's already been "proven" through the courts.

Hearing Bradford speak did make me reconsider this attitude. Just a guy. A normal guy minding his own business. And before he knows it, he is spending a decade behind bars.

Video of Ted Bradford talking about his false confession.

But I think the kicker was reading this post regarding the "Fairbanks Four" efforts to free four convicted Alaska Native men. It talks about another wrongly convicted man who was put to death for crimes he didn't commit. Jesus Christ.

Talk about putting a mirror up in front of your face. If Christ were put up in front of the courts today, would I be that apathetic one regarding his sentence? It's somebody else's fight?

I can't say it's made me an advocate quite yet. But as I look more at their cause and the enormous effort it takes just to free one innocent person, I must admit my own apathetic attitude is a big part of the societal problem.

Whether it's a small effort like donating or spreading the word about the Fairbanks Four or other cases, or larger efforts like getting directly involved in the cause, it deserves consideration, and not just a hardened heart and superior attitude toward the subject. Not only can I not afford the apathy in my own life, people like Bradford still behind bars can afford my attitude even less.
Posted by Writing Raven at 2:30 PM