Good talks and The Coolest Button Ever. 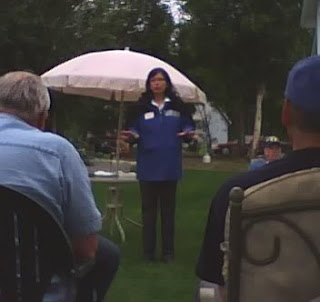 Not exactly smacking of tough political musings, but I received a "Tlingit for Benson" button last night. As an unabashedly proud Tlingit, I must say this button rocks. Hard.
Celtic Diva invited me to a veteran'sgathering last night, and Diane Benson was the guest of honor. It was eye-opening to hear her talk about some of the issues, though mostly she talked one-on-one with each of the guests. Tempted as I was to jump in on some "Rural vs. Urban" discussion, Ms. Benson had it well in hand.
I think the highlight of what I heard from her was the idea that elected officials need to be accountable, and understand, what they are voting for. That so many times politicians will vote on an issue without regard to the true, real life, real people affects - and that this needs to change.
I've heard her speak before about Native art, as an actress, etc., but never in person, as a candidate. She brought up some pretty good points that I'm going to let stew a little...

Posted by Writing Raven at 8:13 PM