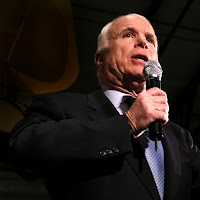 I have finally recovered from an attack by my old nemesis - strep throat - and had to do a double take once I joined the real world again. But then I had to make sure I was in the real world.

Stevens, older, not younger, is indicted. Not a surprise maybe in that it was going to happen, but certainly in the timing (more on that later). But in the middle of all this, the only thing being reported was an earthquake - in which nothing happened. Nada.

Over a hundred caribou are slaughtered up north, and left to rot. Despite the onslaught of Native-hate this brought out, I can't tell you what this feels like as a Native person. Being taught respect for animals - especially the animals you hunt - is no joke.

On top of that, McCain has lost his mind. I generally don't like the negative talk about the opposite side, much less giving his ad more mentions, but McCain made me absolutely crazy today. Let's put a picture of Obama up with Brittany Spears and Paris Hilton, and call that responsible and mature debate. With serious problems going on, worldwide and local impact being felt all around, this is how he chooses to show us what he's made of.

When questioned about the ad, McCain's campaign even laughed about it, calling the ad one of the most "entertaining" things he's seen on TV. Entertaining! This from grown men! Despite being considerably "more experienced" than Obama, as he likes to point out, this is one of the most immature attacks I've ever seen.

But the kicker isn't that he's insulting Obama - he's insulting Obama supporters. Surely people can't be trusted to select a candidate based in his merits as a politician and man - we must all have been seduced by his personality to mindlessly follow him around, despite his A-plus intelligence, well-thought out plans, proven ability to lead and organize, and a few dozen other leadership qualities.

On McCain's count, a running list of Obama's crimes:

He talks about hope too much.

He talks about change but doesn't have real plans (please disregard all his published plans.)

He's too young and "healthy" (today's message from the campaign complains about the fact that Obama expected healthy foods to eat. Dare he!?)

Serious accusations, each. Well, I know that after eight years some of these things are hard to recognize in presidential material, but some of us actually think those are, you know, GOOD to have in a candidate. I'm not the most politically savvy, but Obama appears to be practicing DIPLOMACY.

We could use some in our leadership, and McCain, you've shown what we can expect from you.
Posted by Writing Raven at 8:43 PM