Racking up points in the lifelong Alaskan animal sighting game 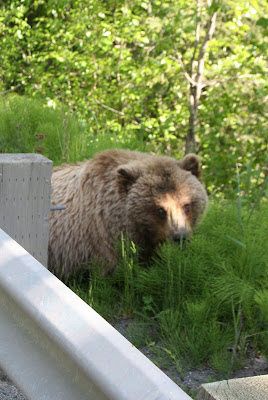 So we're driving along, and my friend gets annoyed at the cars lined up on the highway. Construction season? No. She suddenly yells, "BEAR!" and we go into the only instinctual reaction one can go into when you hear that (in the safety of a car) on the Alaska Highway.

Probably code for that anywhere, but on the Alaska Highway, this can also have some variation like, "Sheep!" (as in Dall) or "Moose!" Though frankly, moose are common enough that that's only if you have a great shot or Outside visitors, and sheep are kind of boring if you don't have a big lens usually.

On the scale of animal sighting imortance, ravens, seagulls, etc. are on the bottom, moose, eagles, dall sheep are somewhere in the middle, and foxes, caribou (to the southcentral folk anyways), and the more shy animals are the highest ranking. "BEAR!" is one of the most valuable roadside attractions -a grizzly like above near top tier, second only to the much more rare wolf sighting (personally, only saw a fleeting glimpse when I was about 10.)

Of course the batteries were out on my camera, and of couse we had to cannibalize some other piece of electronics to get it working. My friend's niece was rudely awakened by her auntie screaming "BEAR!" in her ear - the funny part was, even half-awake, the girl knew the importance of that and was groping around for her camera before actually regaining consciousness.

Fortunately, this was the most relaxed bear ever. Pretty small for a grizzly, about the size of a young black bear, and he was pretty focused on finding something good to eat right on the road side. He stayed put for about 15 minutes as a parade of cars performed a pretty comical merry-go-round between the two turn-outs on either side of him - all to try and get "the shot."

I used to drive the Alaska Highway with my grandparents after spending the summer with them, and I still relish the "count the animals" victory. Of course actually capturing the animals on film is to offer proof - I still can't prove that wolf sighting.

This bear gets to go on my virtual trophy case - maybe not the best speciman ever spotted, but THE best I've personally caught on film... so far.

thanks for this great link