First day of "Spring" - A photo essay on The Arm 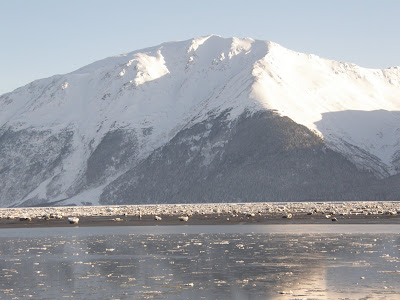 I'm trying to optimistic, so in dedication to my "bff," I'm going to pretend like it really was theirst day of Spring today. Despite what calendars say, I still think any time an Alaskan says it looks like Spring is on its way, Mother Nature adds two weeks onto our winter.

But it HAS been quite beautiful and sunny out, and even after reminding friends and colleagues it is still way below freezing every night, half of Anchorage seems determined to believe that Spring will be here soon, or even might be here. So in the spirit of optimism and positive thinking, I present a little photo essay of Turnagain Arm on the last day of winter, and first day of Spring.

I've been spending quite a bit of time out on the Arm, running out there for lunch breaks, after work or just whenever. If you have never visited Anchorage, or driven the Arm, it's a must for your Alaskan adventure. The 30 mile (more?) drive between Anchorage and Portage Glacier has amazing views for about 95% of the drive, so make sure you're in the passenger seat. 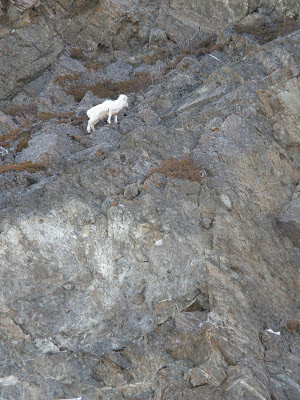 The dall sheep are back! Actually, I don't even know if they ever leave. Turnagain Arm is a great dall sheep viewing drive, but in the winter I tend to have a death grip on my wheel and eyes straight ahead. The Seward Highway has some of the most beautiful views, but this particular stretch of highway is also one of the most dangerous highways in the U.S. - with good reason. If it's not an avalanche it's the icy turns and narrow road.
All this combines to make sure I never see a sheep in winter. Plus... you know. The snow. I've probably seen a lot of white sheep against the white mountain and not known it. 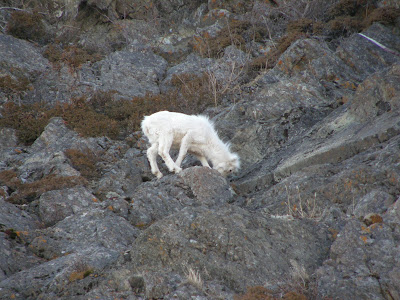 When I was a nanny, I would take the youngest girl on drives to Girdwood and back while her siblings were at school. One of the first times we did this we had a close encounter with some of these sheep, and she referred to driving the Arm as "going to visit the sheep" forever after. 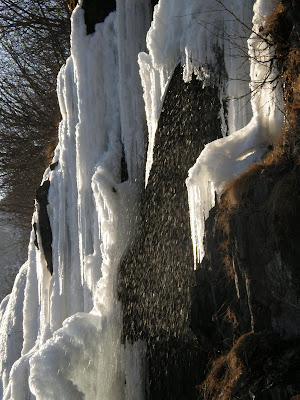 One of my favorite things to do alone on the Arm is grab a hot chocolate (if cold) or Jet Tea smoothie from Kaladis (if warm,) find a favorite turn-out (there's a lot of them) and break out a notepad for some good writing. This is my "most favorite" turn-out. 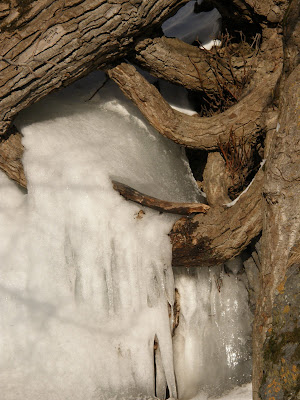 There's a lot of little nooks and crannies on the drive to look for. I'm never disappointed by a drive (unless its the death-grip type, and I avoid those.) 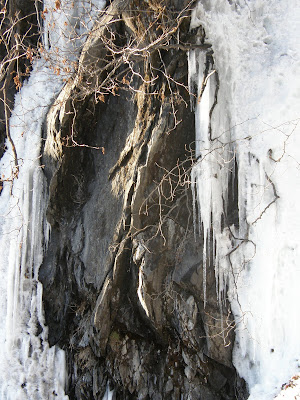 This particular day we were quite enthralled with what Mother Nature was offering up. The sun was really making all the icicles and snow sparkle, the wind wasn't too crazy (it can get pretty intense) and the views of the mountains were, as ever, breathtaking. Whether alone or with someone, the drive can help a lot with perspective, and the idea of continuity.
Does it ruin the romance of that picture to let you know we took our Carr's Chinese food out to eat dinner and were blasting Hootie and the Blowfish the whole time? 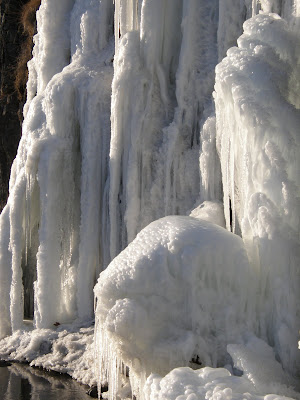 This reminds me of something... 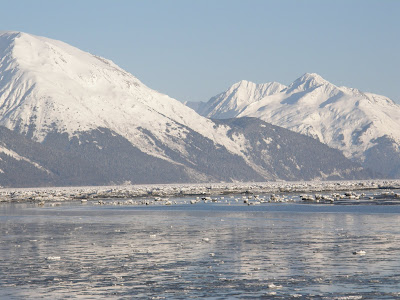 The tide is famous. It's the second biggest/longest tide in the world, and fast, and if it's running in or out, it can have a tendency to look like a big river because it rushes so much with little of the actual tide going in and out feel. It's all mudflats, and more than a few people have died mistaking the placid looking low tide for an invitation to stomp out there. 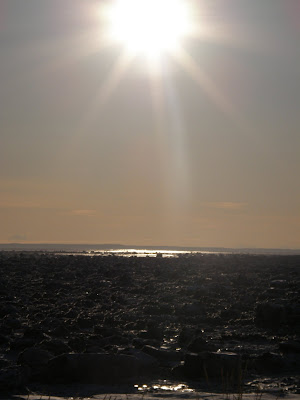 The actual water right now looks wierd to me. It's full of ice chunks and I can never quite tell if the tide is in or out. In the summer, it's obvious, and a popular place to view beluga whales. 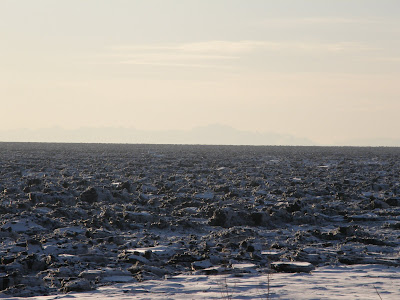 Strange... it looks like some alien planet to me, and I get quite fascinated with the Arm at this time of year. But that is all ocean/beach. I think in the background is Mt. Redoubt, the volcano that's keeping us in suspense lately, but I'm not very good at telling the mountains apart. 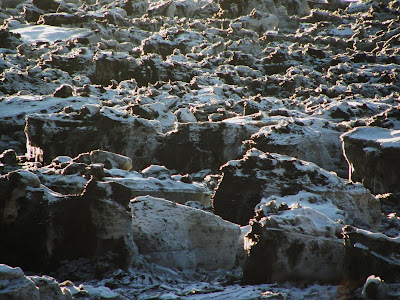 Yes, I'm THAT fascinated with the seemingly alien forms on the beach/ocean. 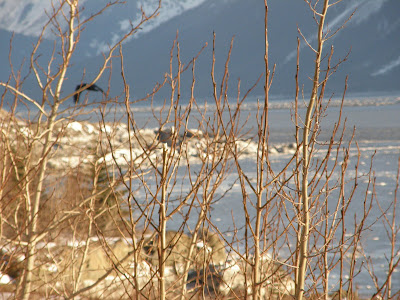 This WOULD be a great shot of an eagle and a raven, but my photo skills are still lacking. So you get a tail shot of a fuzzy raven behind some branches, and you'll have to take my word that there's an eagle in front of him.
This pair was amusing to watch. The eagle kept flying back and forth, and the raven followed him wherever he turned. Not annoying him like I've seen them do when they think eagles are a threat, just following him from a short distance. It reminded us of an older sibling who can't get rid of his annoying younger brother or something. 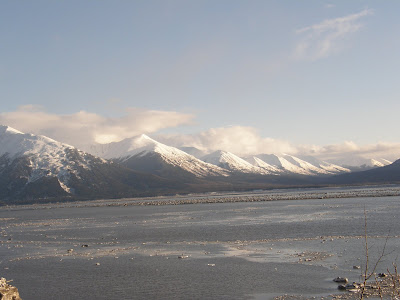 Anchorage has taken me awhile to get used to - I'm originally from Southeast Alaska, a much different environment. But if I just can't handle the city, Turnagain Arm is just a few minutes down the, and reminds me it's not ALL bad. 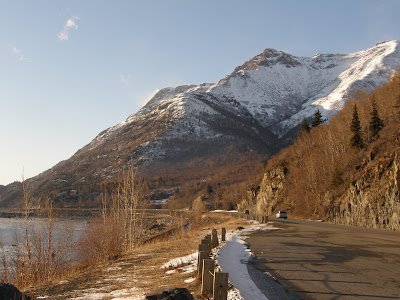 Happy Spring!
Posted by Writing Raven at 1:23 AM