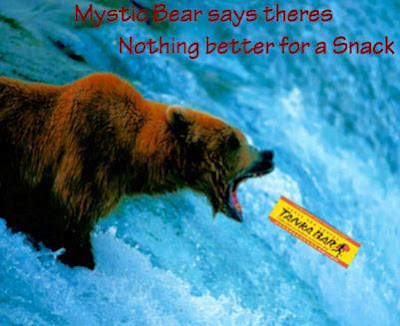 No, not ideas like a bear catching an energy bar. Though I'd pay to see someone figure out how to get that to swim up the river...
Spotted this in Indian Country Today. It's an energy bar called a Tanka Bar - made by Native people, created using a modified traditional process (only five ingredients!) and becoming quite successful in a pretty short time. From the ICT article:

"...We worked with government, major corporations and those projects always come and go and we started studying how we could develop a brand or product where the raw materials were coming from the community and the community itself was really marketing it, to really look at how wealth is created in a modern environment and how we could build a company that was sort of along the lines of a Ben and Jerry’s, a highly environmentally responsible company that would really impact society in a positive way,” Tilsen said.

Not only are they producing something from the Native community, they are also trying to build an "environmentally responsible" company. But they were also looking at the health impacts of the community. The answer being this traditional food, made in a modern way, that could be a real solution for this community.

There have been many ideas, and even beginnings, of products like this here in Alaska, and I would love to see more.

Posted by Writing Raven at 9:07 PM