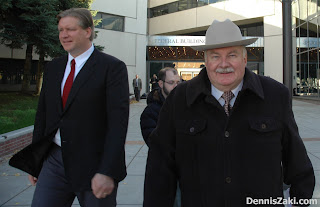 I didn't know much about Palin's new attorney general, Wayne Anthony Ross, when it was announced today. There was certainly a huge reaction from... well, half the people I know, and pretty much all negative.

I was still in public school when he ran for governor, and don't remember anything about that run. "Corrupt Bastard" Kohring's attorney? Sounds about right for the current political decision-making process. I was prepared for the irony that she hires the guy who defended convicted felon/lawmaker Vic Kohring in his corruption scheme, her painting the "anti-corruption" picture and all.

But what else besides the somewhat expected? I spotted the "Who's Wayne Ross?" bit in the Anchorage Daily News, taking mostly from his run for governor. I was still in public school when he ran in '98 and don't remember him in it. I was queasy after reading it. Despite disagreeing with the great bulk of his positions (again, expected), there was this glaring... ALARMING bit:

Native sovereignty threatens to create separate classes of Alaskans and would further divide the state, Ross said. ''The idea of Native sovereignty is a 19th-century principle, and we are going into the 21st century.''

Ross, an urban hunter, wants to keep the state constitutional guarantee of equal access to fish and game. ''Rural preference is wrong and not necessary to ensure subsistence foods,'' he says.

If one more person tells me there's no way Palin can be against Native interests because her husband is part Native, I'm going to lose it again.

Palin picks an anti-sovereignty, anti-subsistence guy for her top lawyer?

Seriously, folks, if anyone could possibly still argue Palin cares at all for Native issues - no, not even that. I challenge anyone to argue she even cares about the Native VOTE at this point.

Speak up, Native leaders. We need to hear your voice on this.
Photo courtesy of Dennis Zaki, http://www.alaskareport.com/ - Ross on right.
Posted by Writing Raven at 11:54 PM

Sarah Palin has finally come of out of the closet to be openly anti-Native. Her rejection of stimulus funds related to education is anti-Native as those funds would benefit rural schools.

Palin picks an anti-sovereignty, anti-subsistence guy for her top lawyer?

Sadly, this should read "Palin picks an anti-sovereignty, anti-subsistence guy for our top layer?

based upon her past actions in picking the AG [Colbert], and his actions regarding troppergate, the correct word was used: "her top lawyer."

based upon her past actions in picking the AG [Colbert], and his actions regarding troppergate, the correct word was used: "her top lawyer."

No doubt, but the AG is supposed to be working for us. That's not a bad thing - if the AG is not working for us, then we should go after AG's boss like pit bulls (or biting flies). Our governor seems to be getting away with lots of funny business - it's time to hold her accountable. WRaven is on the right track.

And don't stop with Palin - I think Murkowski's AG - Renks (sp?) has been living out of state since he resigned. Hmmm maybe there's something wrong with the how "we" pick our AG?

I'm not going to commednt about "Who's Against Rape?" here, because enough has been said elsewhere by people who know more than I But you said one thing that astounded me. You were in public school in 2002! Which must make you in your early 20s. From your ability and your calmness, I would have put you in your late thirties, at least. (Okay, checking your profile, I see you say you are 'twenty-something.' I really should check them more often.)

You have incredible maturity and, again, I admire your calmness and ability to make your points without losing it. Not something that I'd expect from your age -- not something I'd expect from anyone who has to live under the reign of the Baroness Munchhausen.

You say you'll never leave Alaska, which is Alaska's gain and our (the other 49) loss. But I hope you are 'forced' to change your mind about this, because a voice like yours would be very useful in Washington, in an Executive Dept., or, who knows, Don Y. can't live forever, or stay out of jail forever.