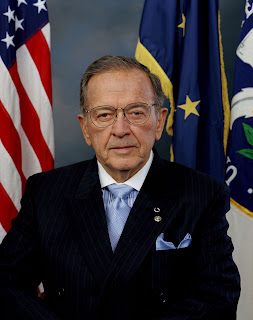 On this, the 85th birthday of Uncle Ted, the era of Ted Stevens is over.

I thought I'd feel a little sad, as I did on his conviction. As I said that day, he HAS done a lot for the state, and he was fighting for Native rights when it was unpopular to be doing so. Although he deserves to lose his seat, and be exposed for what he's done, it was sad to see such a long career ending on such a note.

Instead, I'm happy that Alaska made the right choice. Mark Begich will be a great senator, and I can't wait to see what he gets done. It really is a time for change, and I think Alaska has been lagging behind for too long. Our new president will have the help of a great Senator, and I can only hope Begich will enjoy a long, successful career in the United States Senate. I know our country, and our state, will be the better for it.

But I recognize that people will disagree with his politics, my politics, etc., and Alaskans tend to vote strongly Republican, and esepcially strongly Ted Stevens. Though it was close, Alaskans were able to cross party lines and NOT vote in a man convicted on seven felony counts. There is a limit, and I'm glad Alaska found it.

I'm also glad for Stevens. If he can just accept this, he won't end his career being kicked out of the Senate. I don't care whether he goes to prison or not - I think the legendary status and respect he's lost is enough of a blow for this (very old) man. If sentenced to prison, Steven's will have earned it, but I think Alaskans were able to deal the real justice.
Posted by Writing Raven at 5:52 PM