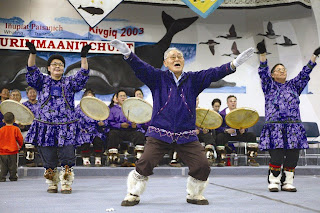 Very cool. Just got this e-mail that a Barrow Inupiaq group will be performing in the inaugural parade!

They will be the only Alaska Native group doing so, and so they will not only be representing Inupiaq people, but Alaska Native people.

In other, very cool, Alaska Native news, I read in the Anchorage Daily News' Newsreader (originally in the Bristol Bay Times) that an Aleut Language Christmas CD is being released! Aleut, or Unungan, is one of the most endangered Alaska Native languages, and it's definitely a good Christmas present to hear this!
Posted by Writing Raven at 3:56 AM