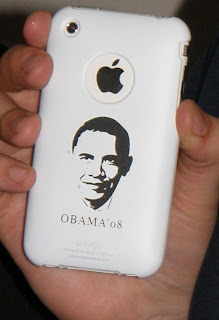 I hope your Christmas was great, that your family was there (and that you got along!) I also hope Santa treated you well, as he certainly spoiled me - including a brand new phone that will make it very easy to blog from anywhere...

I present to you something I found kind of funny as we opened presents. I've heard jokes (and even articles) about how Obama is a "stimulus package" in himself. That the amount of Obama related items on sale is so much that, where other retail is busting, some sites and people are booming. It seems the Writing Raven family did its best to boost the economy in this way!

I present... an Obama Christmas.

The iPod cover is like ultimate branding - very smart. Who wouldn't want to rock out to an Obama mix? 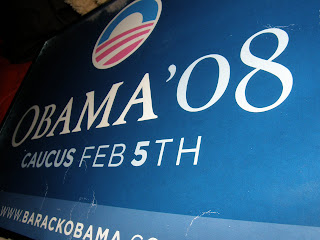 One of my favorites was this simple framing of an Obama caucus sign (they had to steal it from my bedroom.) I've been trying to gather together all the "stuff" from the campaign, as well as the Democratic National Convention Celtic Diva and I went to, and save it. Although it is in abundance now, I think it's one of those "show the grandkids" kind of moments in history.

In any case, this isn't even a sign I waved. The Anchorage caucus was... uh... overwhelmed seems like too small a word... Record-breaking, mass of Obama-ites is closer... But this is one my grandma brought me from Juneau, where she could actually get her hands on one. 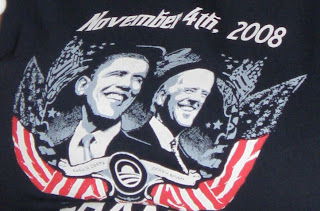 My little sister was wearing this shirt as she opened presents... 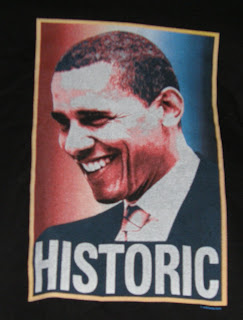 My older sister's boyfriend wore this the night before (and they gave me one, too)... 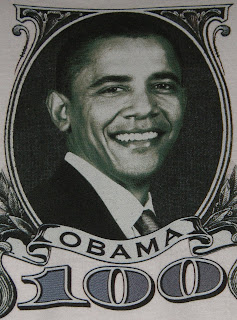 And then he wore this one to open presents on Christmas. So (the future) Mr. President was with us all through Christmas.

I think you can count on us all to be wearing some of these as we watch the inauguration. We made some tentative plans to watch it LIVE, day of. Although I would quickly and happily - if I had the money - trek to D.C. to be there in person, I think watching the festivities in Anchorage will be burned into my memory enough. He takes the oath at 8 a.m. Alaska time, so my viewing will begin much, much earlier than that - probably about 6.

Let me say that again - EIGHT IN THE MORNING AND UP BY SIX! I am by no stretch of the imagination a morning person, so waking up early in the morning on a personal leave day is something I will ONLY do for the Obamer. I had to put it in the perspective that, if I wasn't taking the day off to watch the inauguration, I would have to be at work then anyways. It only dawned on me about the early hour as we were talking about it, and though I want to watch it live, my DVR is wooing me with its power to record and playback at decent hours... 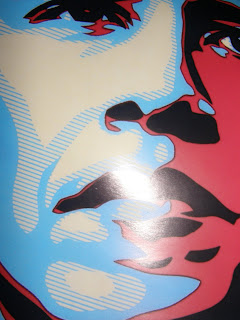 One of my favorite posters - and my older sister's - is the "Hope" poster - so popular everywhere. I actually would love the trilogy, the "Hope" with Obama, "Nope" with McCain, and "Dope" with Palin. 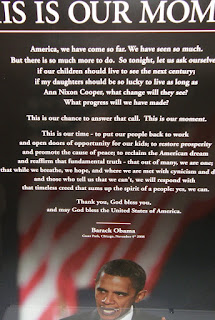 I also love this framed poster, "This is our moment." It has the last words of Obama's Grant Park speech, and is nearly as moving on paper as it was to listen to.

We had an Obama Christmas, too. I got MLB a framed reprint of the Nov. 5 front page of the NY Times. And inauguration tickets.