Why yes, that is a moose butt. 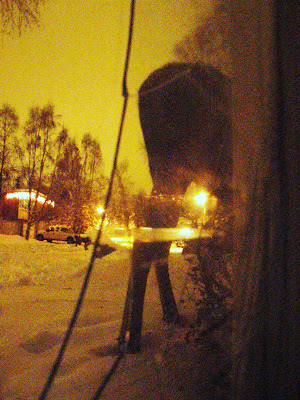 The most unfortunate part about this is my coworker had just been freaking me out a bit by outrageously detailed descriptions of getting chased by zombies. This was fresh in my mind, at midnight, as I finished up my last blog post.

I hear the slow "clomp... clomp... clomp..." on the snow outside. It is EXACTLY midnight. My room is ground level. Yes. Tonight is the night I get attacked by zombies. Yes, I'm being a bit funny. And yes, a little bit of that thought actually did go through my head.


But then I (bravely) looked out the window and saw THIS.

Okay, I actually got to see the much better version. I saw a big ol' moose face chomping on the garden leftovers in the still un-snowed-over edge of the house.

But by the time I ran upstairs and got my camera, all that was in my window was a big hairy moose butt. Maybe quite fortunately, the flash didn't work so well against the window. 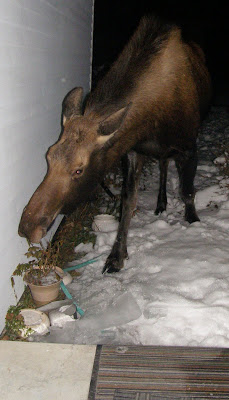 I would like to entitle this picture BAD EXAMPLE.


I see tourists making this mistake all the time, and wonder on how idiotic they are. Don't they know cute little (big) moosies have trampled people to death? Don't they know that moose run the show here in Anchorage?

Sure, you can honk, flick lights, make loud noises from a big distance, but that moose knows you're not going to do nothin'. From experience, I know little yappy dogs seem to have no effect. Big dogs do, but then you just get a squished dog.

So what I do I do with this goldmine of born-and-raised Alaska girl information? As you can see, I have literally thrown out the welcome matt for moosey here. Although technically inside the doorway, that moose would have no problems throwing a hoof or some spittle my way.

I do this for you, my lucky readers.


Well, that and the possibility that I'll get to show my grandchildren just how close I got to a moose one time. Actually, it's TWO times, but THEN I didn't have digital proof! Hence, the irrational behavior. 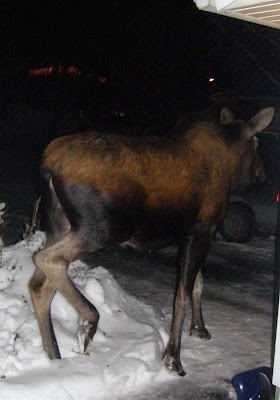 I was trying to show, in photograph, just how big these guys are. They really are impressive, and though most Anchorage-ites will not stop for long to view a moose anymore, most will still turn a head. Here I am raised up on the porch step, so it doesn't give quite the perspective, but really. I may be irrational, but not suicidal. At least one foot must be in the door. Grade school "hot lava" rules still apply. 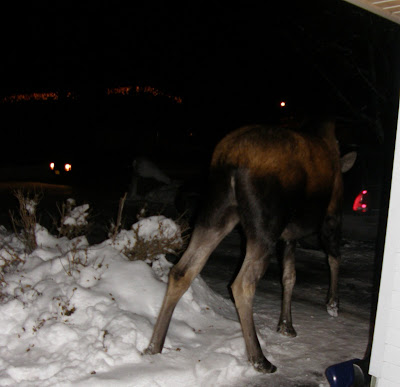 Seriously, I started to wonder about this moose. He stood like this forever - just showing me his butt. Revenge for all the camera flashes he must endure at midnight while he's trying to snack? Something more wierd or sinister? Sir Mix A Lot fan?

If you look carefully, you can see my sister patiently waiting in the street for the moose to move on. She's in a Jeep, but like I said, moose rule around here. 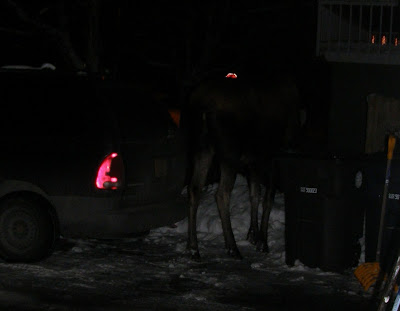 Though dark, at least you get a little perspective. That's a Doge Caravan, and that's a moose being much bigger than a Doge Caravan. And this is not very big moose. 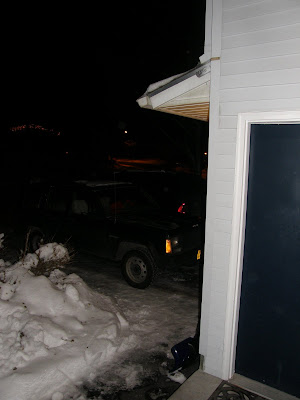 Sis gets in the door, and if you have Wonder Woman eyesight (okay, I don't even know if super-sight was a gift of hers) you can see the moose on the other side of the van. My suggestion to sis would have been to back in, and lessen the distance between herself and the door, but I was too busy creating flashes in her eyesight.

You see what she will put up with just to come do laundry? Brave trampling and rude sisters?

In the sixth grade, we had a "portable" classroom - the kind that is just it's own room outside. A freaked out kid trying to go to the bathroom came running back inside to tell us that a mama moose and baby moose were eating on either side of the doorway.

For those not trained in moose- or dangerous animal- awareness, this equals bad news. Mamas have tempers when you get in between her and her baby. So we waited for hours and HOURS.

Okay... I don't remember how long, but we had to miss recess. Recess people. Why not lock us up in a cage and throw away the key? In retrospect, I think my teacher must have been more affected than us. I mean, thirty or so pre-pubescents locked in a classroom with no bathroom and no recess?

Some brave teacher finally drove her car over and honked (annoyed) them away, because the buses couldn't leave without the trapped children.

I've also learned that drunken moose are much less dangerous than mama moose. Anchorage had the treat of its very own alcoholic moose for a few winters. No really. The moose, the Daily News named him Buzzwinkle, kept eating the fermented crap apples and staggering around downtown, with Christmas lights all tangled up in his antlers.

The funny part was he kept doing it. A news quote from the article - one you just can't buy - "You can't do much for a drunk moose except wait for him to sober up, Sinnott said."

Though no longer with us, many people still have a fondness for our little troubled moose.

What lessons did I learn from this? Apparently, not much. I am still willing to get the shot, readers. And next time, I'm going to try and not get the butt.

Got that close to a mama moose and calf once, long ago, on Elmendorf. Came out of the dining hall early one winter morning, looked up and there they were chewing on a tree not far from the door. Turned in the direction of my dorm and walked away briskly!