Alaskans show up in huge numbers to protest Palin 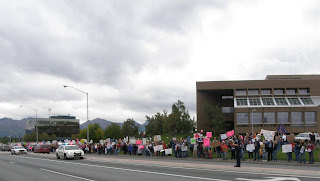 Wow - the "Anti-Palin" protest at the Anchorage Loussac Library today was IMPRESSIVE. I kept trying to get a wide shot, but there were just too many people!
I was running late and was worried I'd missed the whole thing, but this thing was huge!
And by the way, thanks Eddie Burke!
I talked to five people in a row as they left who said they heard about it from "that news story" about Burke's calling the anti-Palin organizers "socialist maggots" on his radio show, and giving out their phone numbers to have his listeners call them. Many callers threatened the organizers, and KTUU at least ran a story on the local news about it. 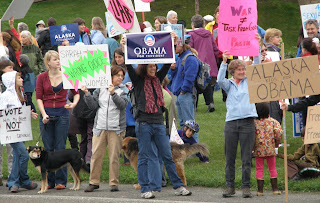 I was also worried not many people would show up - Alaska rallies no matter what the cause just are never that big. If you get a few dozen people, it's a good showing. Outside on a kind of dreary day, I was hoping there would be at least a hundred.
I've heard early reports that it could have been 1,000, very easy to believe.
Having just been down in Denver for the Dem. Convention, where we witnessed some somewhat disorganized protests, it was pretty neat to see so many Alaskans coming together to voice their opposition in an impacting - and peaceful - way. Though APD had a presence, their biggest problem was making sure there wasn't any jaywalking going on.
You could hear them a few blocks down, and saw the crowd before you even saw the flashing police lights. 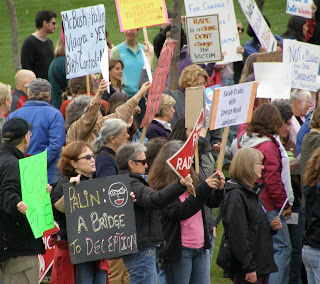 I was also expecting a lot more "pro-Palin" protestors. There were a handful, but not that many. Burke had said he was organizing a "pro-Palin" rally for the same time and place, but they were much less evident than those opposing Ms. Palin as a VP - or simply supporting Obama.

I had to run and do a bunch of errands before the banks closed, and drove by over an hour later. Although much smaller, there was still a good hundred or more holding signs and garnering lots and lots of car horns.
There's a whole lot of Anchorage folks who are very against the McCain/Palin ticket.

Posted by Writing Raven at 5:07 PM

Way to go, Alaskans! We are SO with you down here in the Lower 48! And that radio host's behaviour was appalling. Sticking your blog on my StumbleUpon page; it should get some traction there.

NO MCCAIN
NO PALIN
NO HOW

Here! Here! May the TRUTH prevail! This is one Texas Soccer Mama for Obama who sees the McPalin ticket as Good Ol' Boy -
Smoke and Mirrors politics gone way awry. My cowboy hat is off to all who demonstrated in Anchorage yesterday. And that radio host's behavior doesn't surprise me one bit. You see lots of that down here in the hypocrit belt, I mean the Bible belt. May Obama supporters strive for the higher road. May the educated, pro-choice, pro-science, pro-environment, pro-future of our country and our world seize the day on November 4, 2008. In other words, may there be a fair and honest election.