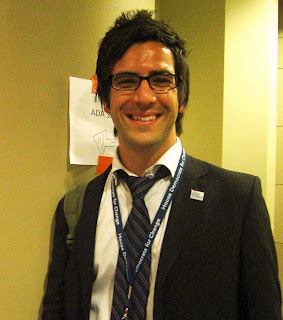 The to-do about Palin delayed some of our last day's posting in Denver, so I'm including some of the more random, but interesting (to me!), bits from the time we were there.

I think the funnier one is the James Bond Guy (also known as Alex. This picture is actually from Celtic Diva.) He is with the non-profit The Israel Project, and despite there being a few million people in Denver, tens of thousands for the convention, and sort of disimilar reasons (and therefore schedules) for attending the convention, we Alaskan bloggers kept running into this English activist.

You may have seen him on earlier posts, because I got a lot of e-mails (mostly from the women readers) about him.

In any case, he was kind of the "Where's Waldo" fun while we were down there. Our events were not complete without first finding out where he was.

If I run into him in Anchorage, I'm going to start talking in code though. James Bond can really be anywhere... 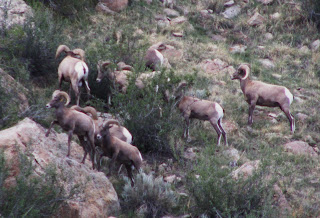 Our hosts, Eric and Kim, took us out to the Garden of the Gods on our last full day. We saw quite a bit of wildlife, actually, though I think the wildlife in Colorado is much better at camoflauge than in Alaska. The rams, deer and coyotes we saw kept alluding us in broad daylight. The moose here in Anchorage don't blend in so well against the street lamps and strip malls. 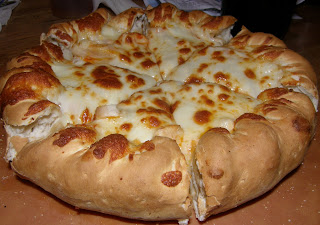 My third picture of food is the most beautiful picture. This "Colorado style" pizza was totally unlike any pizza I've had, and you turn the crust into dessert by dripping honey on it.

Of note (not important note, just "note") is this was "Beau Jo's" pizza in Denver - and just two days earlier we listened as "Beau" Biden introduced "Joe" Biden in Denver. 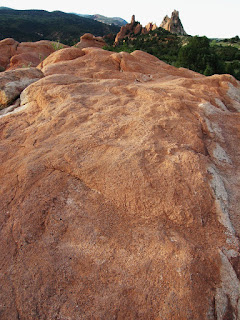 The Garden of the Gods really was beautiful, though the red rocks wierd me out just a little. Like a Mars landing, only really hot and random deer running around.

It also had a GREAT gift shop, with lots of Native made art that was agony to walk by and not run out the door with. 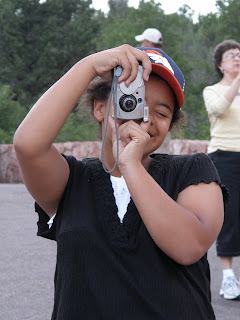 Morrigan was cracking me up with her picture taking, especially following Eric and Kim's cats around.

She was taking pictures to share with her classmates when she got back. I mean, this girl experienced a convention, got to see the first black president be nominated, and met all sorts of people.

As we headed to the airport, we were talking about the good pictures we got. Morrigan:

"Yeah, I have a lot of pictures of the cats." 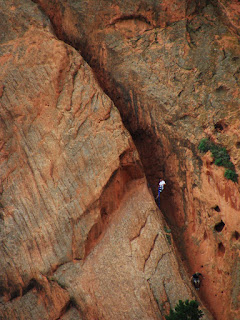 We saw several rock climbers around the garden. 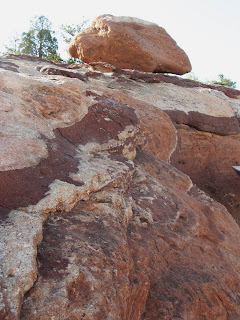 
This school group really got everyone in the mood after the eternity of a line to get in. It was like a reward for surviving the line, and the heat.


I made sure it was not just Alaska heat wimpy-ism that I was dying in the heat. I asked a family from California if this was hot to them, and they confirmed that I could feel like I was roasting without sacrificing the tough Alaskan attitude.


I think this guy would have gotten more money had he not looked like he had burnt to a crisp right there on the sidewalk. It was surely a feat of the most supreme stamina to stand still for hours to look like a statue in million degree heat, but he kind of reminded everyone how hot it was.


The flip side of this is a hand-written "Stay Positive" message. These were handed out to the million-man line by a bunch of young kids. The reverse, which is what cracked me up, reminded us, "It's a sign."


We had the sort of clown car feeling when Morrigan and I made our connecting train to the stadium. The door opened, and there were people packed in so much that people were hanging out. Enough people got off that Morrigan and I could cram in, but we were literally pressed against the glass door, using all the powers of our tippy toes to stay in a safe place.


Go Obama! Love, Alaska.
In the trading button business (a favorite pastime of the delegates,) the "Alaskans for Obama" buttons were a hot commodity.

The Alaskan delegates, complete with the good ol' "field of blue."
And yes, they even sang the song!

All but one of the Native delegates from Alaska.


You are here.
Or at least, Alaska was here.
The homing signal for Alaska.

His recorder playing wasn't that impressive, but three guesses why his hat was full of money?
Yep, me too. The only street performer of the many I passed that paused to listen and throw some money at.
A smart, smart man.

And look who else made an appearance!


The confused look and lack of pace was due to our lemming-like following of the people in front of us. The people in front of us were doing the same, and the people in front of them, and so on, and so on. Nobody actually knew where they were headed. In fact, just after we finally made it through this bottle neck, nearly a quarter of the crowd abruptly turned around and started heading the other way.
Morrigan and I somehow found ourself walking through grass, shrubs, trees, and then by a creek. In downtown Denver. In the dark. With wierd noises all around us that could have been crickets and frogs, but also could have been man-eating beasts of enormous stature.
We were literally walking for about an hour, and it slowly was dawning on a lot of people that nobody really knew where they were going. With rail stations shut down, streets and even interstates blocked off, even the Denver-ites didn't all know where to go.
At some point we regained our sanity and stopped. We considered camping out until daylight, but our wonderful hosts, with a bit more sense than I was feeling at the moment, rescued us.
Posted by Writing Raven at 10:50 PM