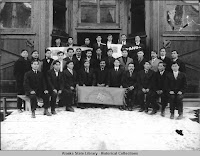 Guiliani and Palin took Obama to task last night for his college job, and just-after-college job - Community Organizer - a job which Palin doesn't view as having "real responsibilities."

Some other community organizers:

ANB was formed in 1912 to address Native rights in Alaska. It is an organization still active today.

Elizabeth and her husband Roy were just two of many members of the Native community to stand up to injustice, and fight for civil rights in Alaska. Elizabeth is still honored each year with a state holiday in Alaska.

Paid the ultimate price for what he, and so many others, organized in the American community.

Countless men and women throughout the centuries have been community organizers, and only in the last century were they sometimes given a title. Their responsibility is great, made much more so because they must motivate people, by the very definition of their job, to change the status quo. It's not a job where you come in, make sure the budgets are balanced, hire and fire whom you want, and leave to the next guy. Community organizers come in so many times to address what politicians won't.

What is interesting about the Guiliani/Palin attack on the jobs Obama had during and just after college - mainly getting a community to help itself, to be stronger - is what came out, from Fred Thompson - chosen to speak by the McCain campaign! - in the convention about what McCain was doing during his own academy years:


"In high school and the Naval Academy, John earned a reputation as a troublemaker. But as John points out, he wasn't just a troublemaker; he was the leader of the troublemakers.

Although -- although loaded with demerits, like his father, John was
principled even in rebellion. He never violated the honor code.

However, in flight school in Pensacola, he did drive a Corvette and
date a girl who worked in a bar as a exotic dancer under the name of 'Marie, the
Flame of Florida.'"

Okay, I'm not sure why anyone would think those were selling points, not to mention throwing attention to how McCain barely scraped through the academy. Seriously, having had Bush this long, why does anyone think low intelligence in a President is even remotely funny anymore? Is this the "laugh so you don't cry" part?

During the Naval academy, McCain was a self-proclaimed "troublemaker" who liked fast cars and loose women, and even after his genuinly heroic stand as a POW, still couldn't give up either.
Call me boring, but I'll take the nerdy, responsible guy over the adulterous, educationally underachieving guy any day.
Posted by Writing Raven at 11:48 PM

If anyone thinks that there is anyone at the Naval Academy with low intelligence, they better check themselves in the mirror. The Academy has the highest admissions standards in the country. In recent times it has produced more Rhodes Scholars than any other school. Class standing at the Naval Academy is not determined by grades alone. In fact, grades are only about a third of the class standing calculation.

The big difference between John McCain and Senator Obama is that you can trust John McCain.

OR they need to have a Daddy who is an Admiral. When they tried to get John McCain's records that got him admission? Opps they had been "lost" over the years. Yea right..... John McCain? could not find his heart pills without someone handing them to him.
Give me an honest, moral President anyday of the week...in this race? That leaves Obama/Biden because Sarah "I have ethic issues" Palin and John " I cheat on crippled spouses" McCain sure won't ever win any adwards for their moral achievements.

heard on a call in show today:

"Jesus was a Community Organiser.
Pontius Pilate was a Governor."