Todd Palin and his heritage, the "Series of Tubes" looks at both the Palins 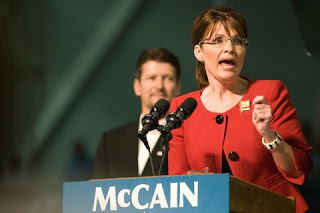 I'm Palin'd out. Again. Or still. The freudian slip she posed today by calling it the "Palin and McCain" was chillingly unshocking, not to mention the refusal by Todd to speak, despite the subpeonas.
I paused today to Google Palin with some keywords to see what was being said about her and Native issues. The last time I did this was a bit horrifying. There was a lot of "Her husband is Native, so she must support Native issues" kind of information, a flash-back to her gubernatorial campaign here in Alaska.
Now, the bulk of the information on Palin and Native issues, though still relatively tiny, is fairly accurate. The pdf document Sarah Palin's Record on Alaska Native and Tribal Issues is, by far, the most dominant document/article in regards to her stand on.... well, obviously Alaska Native and Tribal issues.
Some myths, and questions, persist about Todd Palin's Yup'ik ancestry. A few:
For starters, the PC terms (I know, I know, but we Alaskans have a set of our own terms, too) would be Yup'ik or (groan) Yup'ik Eskimo if the person is okay with it. Eskimo is not the most popular term to be used by non-"Eskimo" people in reference to them. Yup'ik is best.
NOT Inuit. NOT Native American. NOT American Indian. Alaska Native is acceptable. (I have a big ol' post about this, and the confusion of it, but just trust me on this. You'll make more Native friends this way.) Some of these terms are not even because of PC, but government distinctions.
As for the "ancestry," the numbers of his blood quantum I've heard range anywhere from 1/4 to 1/16. I've seen a few comments of "why does this matter?" Ah... the long raging politics of blood quantum!
We, as Native people, must show proof of Native blood for most things regarding Native services, organizations, or (in my case) jobs. To me, it sounds as though Todd must be 1/8 or less at least. Although he is a shareholder of the Bristol Bay Native Corporation, all you need to be a shareholder is to inherit the shares (which he could have gotten from his grandmother or mother.)
What hasn't been mentioned is whether he is an enrolled member of a tribe. There are more stringent blood quantum requirements for some tribes. That they haven't said, "And a member of X tribe... or X village tribal organization..." is pretty telling.
What keeps being mentioned is that he is a descendant of a Yup'ik woman (his mother.) I didn't connect with why this kept coming up in American Indian (Lower 48) commentary until I realized that, as Alaska Native people, this is a very common term because of the corporations. For many services or memberships, you can either be an "original shareholder" or a "descendant." If you were not 1/4 blood quantum Alaska Native in December of 1971 or before, you could not be an original shareholder - which is why, though I have more than the required blood quantum, because I was not born earlier, I am not an original shareholder. I am a "descendant." The frequent mention of his mother and of his being a descendant tells me that he is used to signing on as a descendant, not an original enrollee, which means that, despite him being born before 1971, he was not 1/4 or more Yup'ik.
To be very clear - I absolutely do not believe that blood quantum defines how "Native" you are. The frequent mention of it as a disqualifying factor is wrong. For that matter, there are countless ways to be a proud member of the Native community, and none of it has to do with that extra 1/16 more Native blood you have than the next guy over. What defines you as a Native leader, and a Native example is much easier to nail down, and in this case, Todd would not be the definition of either.
He has also never been part of the Southcentral Alaska Native culture, nor have his children, despite being raised here. To me, this says he is either disinterested, or because he is limited in a few of the organizations (namely tribal) he is rejecting the whole. In any case, both the Palins have a dismal record on Native issues, so please, do not look to Todd's heritage to help with them. That he hasn't done anything because of it so far is a good indicator that he won't be encouraging his wife on anything in the future.
Here are just a few of what I am finding now around the "series of tubes" (just one more Alaskan nod for ya'...:

From Indian Country Today, the examination of John McCain and Sarah Palin on some Native issues and legislation.
Presidential snakes on the Indian plane

From the Washington Independant, more on Alaska sexual assault than purely Alaska Native women, but it makes the connection well.
Palin and Alaska Native Women

From Green Party Watch, focused on (you guessed it!) more Green Party concerns than strictly Native issues, but these issues often coincide.
Sarah Palin and Alaska Natives, Part 1
Sarah Palin and Alaska Natives, Part 2
From Native American Netroots, an unabashed Biden supporter stacks the two VP candidates up (I know, she said the Palin/McCain administration, but she really is still technically going for the VP slot)
Biden vs. Palin on Indigenous issues

From Daily Yonder, it would almost be funny, if it weren't so frustrating. Democratic Convention Native Delegates = 143. Republican Convention Native Delegates? 1. No, that's not a typo. ONE. His name is Bobby, he's a Bible cover manufacturer, and he used to be a Democrat.
Searching for signs of Native American life at the Republican Convention
From New American Media, a more broad look at what Palin has done on... well, the title sort of says it all...
Palin has no record on diversity or civil rights

Thanks for posting this. I definitely need to learn more about this!

Hi,
I found your blog while reading ADN. Your post was very helpful to me in my quest for info on Sarah Palin, and I thank you.
One of the things that has been a huge help is Alaskan bloggers such as yourself and Mudflats posting info that probably would not become common knowledge otherwise.

Anyway, you have made a friend, and I will be back. :)

You can find my blog at www.inspireemotion.com , and feel free to join the discussions there. I would love to have you write a Palin article as a guest blogger.

Thanks for posting this. I was wondering about Todd's relationship with his Native heritage since it has been bandied about by the McCain campaign. I thought it was pretty telling that in any of the interviews or speeches I've seen regarding Todd or Sarah, neither mentioned or demonstrated a living relationship with Todd's Yup'ik heritage. So your post confirmed what I had expected--that it is non-existent.

I, too found your blog by reading adn. I have a smidgen of Cherokee blood, through my father's side. His grandmother was 1/2 Cherokee. His memory of her oral stories, told to him as a child, and a few photos is all I have of hers. I cherish them. Being a genealogist, I was able to verify much of what she told him.
Because of her struggles, Native American issues and Politician's handling of said issues, is very important to me. I am looking forward to reading the .pdf file you mentioned and it will go a long way in making my decision on how I am going to vote. I have been behind Obama, but was looking forward to having a woman in or close to the Presidential chair. Palin's voting record on women's issues was a major disappointment. Adding Native Issues to that means I will be sticking with Obama. I wanted to vote for a woman. Not just any woman, though. It looks like Palin will not be for any of the issues I care about.

I dont know where your getting your info from on Todd but his Native roots come from Dilligham where he and his family are every summer his grandparents live there
and the family owns the village store.
He has spent a lot of time there with his cousins Commercial fishing and Moose hunting. I myself have seen him a few times at the AFN conventions. There is more info but the media has caused enough problems. You know how Natives do not like people in their family buisness Todd has original shares Regional and village. Some dont dwell on who sign up for what. There are a lot of us older Natives that have worked with Todd on the Slope and he sticks up for Natives rights when he has been there. I do not know Sarahs Position on this but she is not Todd. We come from tattitlek ,Tanana,Nulato,Ruby,Clarks point,Eklutna and have respect for him as a Native Person. It saddens us that the younger generations are hung up on this who is how much blood or culture .
I didnt see anyone wanting to be Native before the claims act .
These Gusuks have no soul to stoop as low as they have over a Election . Disgusted

is a dead link do you have the PDF still?