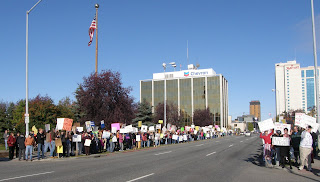 Today at least 1200 (don't have the final count yet) fellow Alaskans gathered for the Hold Palin Accountable Rally, hosted by Alaskans for Truth. The gathered to demand that the state government be taken out of the McCain campaign's hands and be put back in the hands of Alaskans. 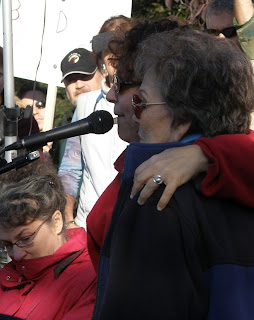 And just who was a surprise guest?

Yes, the same Walt Monegan that was fired by Gov. Palin, and was the reason this whole Troopergate investigation began. The crowd rippled when it was announced who was speaking, and many got quite emotional. She began by saying she didn't realize her son "had so many friends." 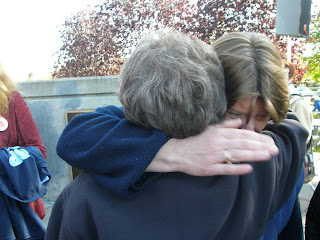 After Betty (Walt's mom) spoke, she was flooded with people that wanted to speak with her.

One of them was this woman hugging her, who said that she worked for APD in the 80's, where Walt started. Walt had supported her in sexual harrassment claims she had made against other officers, and gone beyond what liability meant. He made sure she was okay, made sure she got professional help, counseling. She wanted Betty to know she supported Walt. 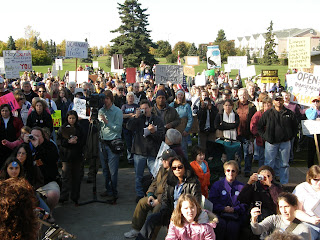 There were quite a few speakers, talking about anything from personal experiences with Gov. Palin to demanding that Talis Colberg resign or be fired, to support for Walt Monegan.

The recent taking over of the state government by the McCain campaign got the most response from the crowd, as well as the smearing of Walt Monegan by Palin's administration. 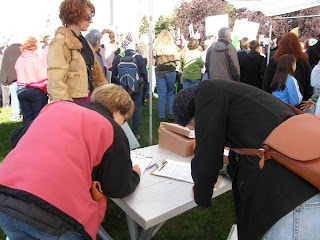 There was a petition available for all to sign, demanding justice through the removal of Talis Colberg. 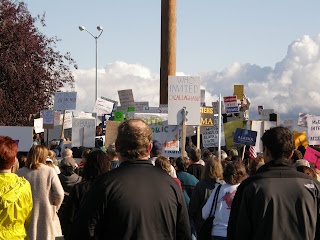 I see Celtic Diva speaking! Do you?

Okay, neither do I, but here she was. She talked about a response that many people here in Alaska had. When she first met her, she thought, "All right, she's pretty good." Palin is pretty personable.

But she also talked about the more recent revelations we've had about Palin, beginning before the VP thing, about Palin's vy for power, and cover-ups. Much of what was said was about not knowing much of Sarah except her personality, and now that we know... well... 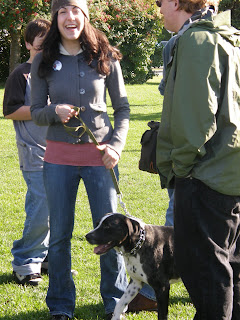 Lots of dog owners in attendance, including this one who joked about her "pit bull against Palin." 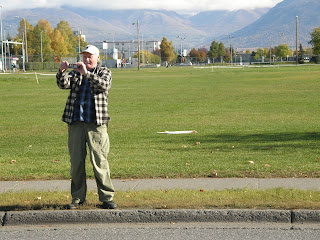 But the Palin supporters were out too!

Or... well, it was pretty much this one guy, who kept shouting "Support Palin!" at intermittent times. the 1200 other voices shouting something much different did not allow for much else.

I did hear (but not see) that there was someone with a sign down lower in the road, that said, "Bitter women ahead."

Maybe the same person who asserts that any questioning of Sarah Palin is sexist? 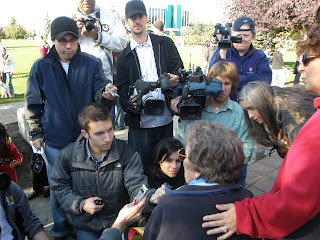 The rock star of the day though really was Walt's mom. She spoke only briefly, and was really surprised by all the attention, but she carried both a sense of humor and an emotional support of her son through it all. Even while being surrounded by media and Walt Monegan supporters, she carried herself very well, and joked about what her son might say once he found out about all this. She also spoke eloquently about how proud she is to be Tlingit, and that her son is proud also. I will post later about some of the many Alaska Native overtones that took place throughout the rally.

Note: Did you know Walt Monegan's dad was posthumously awarded the Medal of Honor? 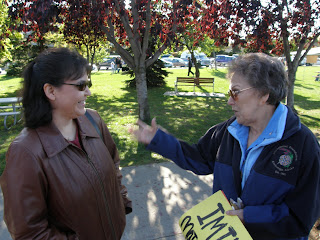 My own mother, and Walt Monegan's mom! The next governor and Lt. Gov., you think?

This is actually right after they hugged, and my mom said, "When I heard who you were, I just had to come over and meet you."


Short clip of the main protest.
Posted by Writing Raven at 5:09 PM

I think my boyfriend and my brother, both of whom were in attendance, would resent being called "bitter women."