A mixed bag on September 11 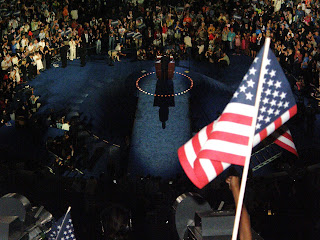 The date "September 11" is still a little striking to me to see on documents, e-mails... anything really. Of course, it is just any other day - but it's also a day that marks so much. I don't mean just the lives lost - the fear and reaction, the policies and laws, the rhetoric and standards - I don't know what it would have been like had this day not been so pivotal.
And of course, it is still just any other day. I went to work, I got frustrated over both genuine and admittedly petty things, I laughed some, I sent boring e-mails and got interesting news. Just a day.
The local news station really made me start thinking about this. They covered the small ceremony here in Anchorage, the large dedication in Washington, and of course the presidential candidate visit to Ground Zero. But they also included a spot about, "Just another day." They showed people walking around, one lay who forgot that today was the anniversary. Most unfortunately (I wish they would have left it out) they interviewed a Canadian woman here in Anchorage, who, when asked if she knew what day it was, responded that if he was talking about all that "stuff" in New York, she was sick of hearing about it (and yes, with that language.)
Some day this will all be history. Not so many generations into the future, it will be Pearl Harbor - something that really only gets "old" people emotional, or remembering something. A lesson in a book to most younger people. Even more generations, and it will be a date you memorize for a test, and only history buffs really care about.
But going through today, I realized that to me, at least, it still does not feel like "any other day."
I didn't know anyone who died that day, but I remember watching, live, as the towers fell and my dad said, "A whole lot of people are dying right now," and how helpless I felt to watch it happen. I never met anyone who had a business in the towers, but I remember the CEO, the guy who was taking his daughter to her first day of school, and was so desperately grieved as he talked about how his entire company, all of his employees, were at the top of the tower, and didn't get out. I never met any of the firefighters, but I remember, for the days of watching the coverage, wondering why they still had all of these wierd sirens going that you could here all over the place, only to find out that they were the alarms that the firefighters had attached to their gear that would go off if they stopped moving.
The reminders of the day seven years ago are still in the media, and still on people's lips. Friends planning a party, until someone noted the date. It just didn't feel right to have a party planned for today. The radio station playing musical memorial clips and callers talking about that day. A car with a painted "We still remember" on the window.
It is strange to think about the children I babysat recently - they will never know what it was like, or how the country was different. Watching a movie just eight years old, and seeing how out of date greeting people right off the jetway is. I could not have imagined, ten years ago, that so many would be complacent about many civil liberties going out the window, but hindsight shows us what fear will do.
I don't know what history will say about September 11, 2001, or what it will say about the "post-9/11" era. What will it say about our reaction, and how we handled this time? Most of that is up to us.
Posted by Writing Raven at 9:23 PM

Lately, a selection of the most charming women conducted by professionals is published by the U.S. media, and Michelle Obama ranks on the top. cartier jewelry You should never wonder why women like Angelina Jolie and Gisele Bundchen get left behind. cartier jewellery So simple! Just imagine that if such women are in the office, what is the consequence? cartier As for face and figure, Michelle Obama may be not the best; as for taste on fashion and capacity of matching clothes and jewels, she is undoubtedly the most excellent one. cartier jewellery In view of her figure, age, status, and taste, she is a new ideal model for global women in the middle class. cartier As for these professional women with high positions, they also finally get a cartier model who deserves to be imitated. cartier jewellery Except pearls, Michelle Obama also likes to terrace her jewelries. A typical example is she wears Cartier upon Cartier, which is envied by most women. cartier jewellery Lamination plays an important role in keeping the focus of eyes and increasing the sense of gradation, making her look so luxurious and bright that is hard to be ignored. cartier However, these cartier jewellery jewel are mainly for women with certain abilities, capacity, qualities, and experience. cartier jewellery And they, truly, need a piece of brilliant jewelry to dress in order to be confident among women in the same class. cartier jewellery As for these young ladies, diamond lamination may be too expensive. So the silver jewelries, such as Cartier and Channel silver jewelries are right alternatives. cartier Focusing your attention on Michelle Obama is equal to focus on fashion and you can then lead a wonderful life as an OL. cartier jewellery