Will you be at the rally tomorrow? 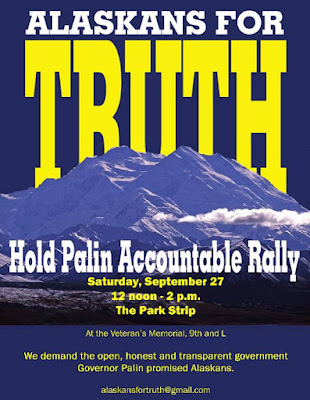 "Hold Palin Accountable Rally"
Saturday, September 27th, noon - 2:00 pm
Downtown Park Strip; between I & L streets and 9th & 10th.
Main stage at the VA Memorial, east end of the park near L street.
Join your Alaskan neighbors in demanding that:
-- Gov. Palin uphold her promise to us for an "open, honest & transparent" government.
-- Gov. Palin uphold her promise to us to cooperate fully with the independent investigation as initiated by the bi-partisan Legislative Council.
We, the People of Alaska, also:
-- Demand the immediate resignation of Attorney General Talis Colberg.
-- Demand the McCain Campaign immediately remove itself and its influence from our state and local government.
-- Demand the McCain Campaign ends its attorney, Ed O'Callaghan's unlawful intrusion into our Department of Law.
Posted by Writing Raven at 12:54 AM