Day One - Livin' the dream 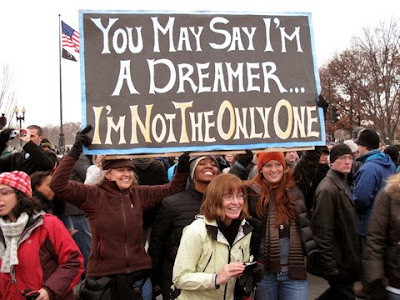 Now he's really the president. I mean REALLY. He took the oath twice, just to make sure.
I gave up trying to write a post about it. I'm sure many, many words will come later, but I think this inauguration meant something different to everyone. And now the REAL work begins.
I had about a hundred favorite moments, but the one I will remember forever is when Yo Yo Man and Itzhak Perlman performed. Not only was it beautiful, but the exact moment Obama became president was in the middle of their performance. The newscast we were watching announced it... just like that! Magic! Obama closed his eyes to listen to the music, and when he opened them he was president.

Email ThisBlogThis!Share to TwitterShare to FacebookShare to Pinterest
Labels: obama inauguration, perlman, yo yo ma