The end is not here. But I'll keep you posted.

I am counting myself pretty lucky that the apocalypse did not, apparently, happen this weekend.

Anchorage-ites have been having some fun weather the last two weeks. First, temperatures going down to -35 in places. Then, it swung nearly 80 degrees in a matter of days, and the temps went to around 40. Schools, which very rarely shut down (i.e. NEVER, and a source of bitterness that I never had one when I was in public school in Anchorage) have been shut down for three days because of the horrible situation that makes on the roads. Warm weather is the biggest cause for inconvenience in an Alaskan winter. The poor kids were still standing outside, or walking, to schools in -20 degree weather, but it goes to 40 and we make them stay home!

But Friday, I was fairly certain the world was giving us a sign it was ending. After being up half the night deciding whether the crap hitting my window was either zombies or debris from the 100 mph gusts that blew in, maybe I was just a bit delirious. 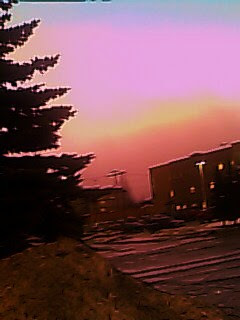 For about half the day, I was staring at a tree. I have made fun of Anchorage trees (being originally from big, beautiful heavily-forested Southeast Alaska) but underestimated the damage one could do if it came visiting your desk.

I have felt lucky the whole time my desk has been at these big picture windows. But then I realized big windows can mean big crash. This tree kept looming closer and closer, the winds around 80 mph at times - and I stared enough my coworker remarked "No matter how much you stare, it's not coming down."

I beg to differ. It was a real possibility. The above is a pic of the Totem Theatre McDonald's PLAYLAND windows - much the same size as my own. They got blown in!

Then the sun set. I was almost sure the end had come.

The sky turned dark purple. Not "purple mountain's majesty" purple. DARK Halloween purple. Zombies are on their way purple. I tried capturing it on my cell, but it doesn't capture how everything turned very very eery. I'm hoping the camera shots I took turn out.

Now, I don't know if this means the end for everybody is coming, or Alaska is going to be swallowed into some crazy horror show. I heard there was a movie out recently where a bunch of people in Alaska had to out-wait zombies? Never saw it, but maybe it was a documentary? Can anyone, with finality, say the North Slope is definitely still with us?

So I'm going to stock up on canned goods, and if you don't hear from me for awhile (let's say by inauguration day) please call the authorities to make sure Alaska is still with us.

Err... actually, if you could just wait for Obama to handle that, that'd be better. I don't really want Bush's last moment in office to be screwing up the rescue of the few surviving members of the Great Alaskan Zombie Attack.

It just may be me.