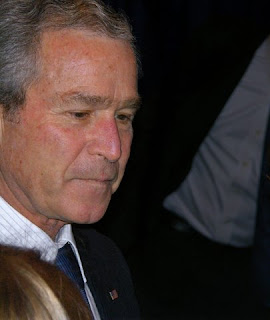 At 11:59 a.m. today, D.C. time, there was exactly 24 hours in the countdown to Bush leaving office. We have less than 24 hours to go until Bush will no longer be in charge.

Bush will no longer be in charge.

BUSH WILL NO LONGER BE IN CHARGE!

So I'm celebrating. The "end of an error" moment in history is a big moment in world history.

And I'm giving one last tribute to Bush - and all he's meant to me. He is the only president that I've had in my adult life, and I'm REALLY looking forward to the next one.

Join me as we go over some of the fond memories of good ol' Dubya... 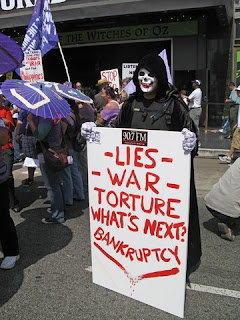 I've heard some people say, "Well, you can't really blame one person for the economy..."

Sure I can. Oh, there were plenty of people who helped out, but for a man who makes sure we know, "I'm the decider," well, certainly he is. As if about a gabillion people weren't saying, "Don't do that" when Bush was deciding best business practices - namely regulation. Or the whole "don't have wars over oil" thing is good advice for those who want to keep gas prices down. For that matter, the amount of the BAILOUT was roughly the same amount as we spent on the Iraq war...

But the decider decided us right into a huge financial meltdown.

The picture beside me, for instance, was taken over a year and a half ago. If a guy in a skeleton mask can figure out where it's all headed, I'm not sure why Bush couldn't.

An Iraqi man gave me the best image to think of when I think about the economy and why I can't rent an apartment for a price I can afford. He gave me a shoe... 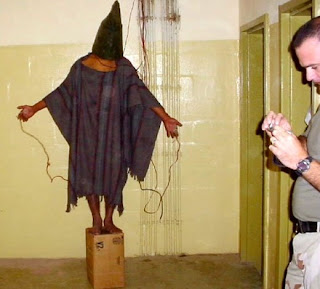 But a huge financial meltdown can just be a mistake, right? It could be incompetence, could be, as Bush says, just that he never did good in Economics. It doesn't neccessarily mean immorality.

No, for that Bush gave us torture and treating men like animals.

He likes to blame this on troops, and certainly those individuals did their part. But an awful lot of soldiers seemed to feel like they weren't going to get in any trouble - SHOULD be doing things like this, in fact. I wonder where they got that idea...

Bush has, more or less admitted there were some "torture-like" things being done. Sorta. Kinda. And where has this neccessary measure gotten him? 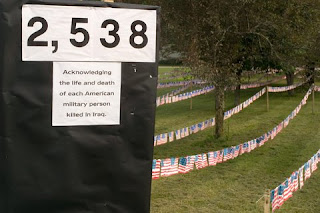 Lots and lots of dead people. Lots of dead Americans, lots more dead Iraqis. Some dead Afghani people as well, but we don't hear much from them. You know, the supposed reason all this got started.

Bush has been getting an awful lot of credit lately for "keeping us safe for the last seven years."

WTF? Whenever I hear this, I want to say, "What about year eight?"

Sept. 11 still has some of the taboo topic around it, but I don't believe Bush gets off scott free on this. There was solid intelligence saying bin Laden was planning some big things. It was ignored. Bush is not responsible for the attacks, he is not responsible for mad men who do these things - but he also doesn't get credit for "keeping us safe." Can you imagine if Bush had gotten shot at eight times, and only hit once? Would his Secret Service guys be telling him, "Boy, aren't you glad we protected you against those seven bullets?" 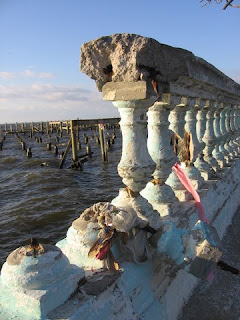 Which brings me to Katrina. Here again, we can't blame Bush for a hurricane. And there are an awful lot of people to share blame for the emergency services failure - not to mention the failure of the levees in the first place. But for FEMA to become (as the finding was) a "dumping ground" for political appointees with no experience, but whom the administration needed to give a job to?

My advice to all future administrations is this - if you really need a political dumping ground to curry favors, please just make it some department that, you know, isn't so neccessary for BIG, CROSS-STATE EMERGENCIES!!


Kodiak Konfidential posted something I thought was actually better than reminding everyone of the screw-ups we all know about. I mention some of the big whoppers that Bush was in charge of. Although I posted a few of them before, I didn't even mention all the "little things" like screwing over Indian Country, etc. But Ishmael found a nice little article over at the Daily Beast that reminds you of some of the "forgotten Bush Scandals." I mean, in eight years, there were just so many to try and remember them all...

10. In order to get tickets to a 2004 election rally with Vice President Dick Cheney, attendees had to a sign a “loyalty oath” affirming that they would endorse Bush's re-election.

This was the sequel to the first article the Daily Beast did.


And tell me the universe doesn't have sense of humor? I just read an article in the Washington Post about a whole load of Bush administration folk who are finding it difficult to find jobs in this crappy economy. It seems many in the administration literally worked themselves out of jobs!

"The cream always rises to the top," added Nels Olson, of the executive recruiting firm Korn/Ferry International. "Those that are the first-rate individuals out of the administration and who have developed good bipartisan relationships and have solid policy experience will be able to make the transition."

Still, one day last week, Michael Castine, also of Korn/Ferry, said he had received calls from half a dozen senior White House aides "who don't have anything in the hopper yet " He said, "They are loyalists who stayed the course and are not sure what they're going to do."

Posted by Writing Raven at 6:59 AM

Incompetence on destroying our economy? No. It was deliberate. For an eye opener on the history of this debacle, read "The Wrecking Crew," by Thomas Frank, published in Harper's. For example, Karl Zinsmeister, one of this neo-con gang of criminals (like Abramof) and zealots, was appointed as chief domestic policy advisor by George W. in 2006.