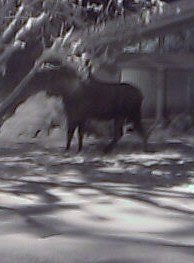 Okay, remember a few weeks ago when I counseled (and showed you bad examples of) moose safety?

Well, just the other night I had an excellent example of a very aware Anchorage-ite practicing excellent moose caution, and I thought I would share it.

Yes, it's a crappy picture, but it's a nightime camera-phone pic from a car. Although Anchorage people are allowed to slow to watch a moose, they are a frequent enough sight that, unless it is entirely convenient for all the other drivers, politeness decrees you should not stop. Unless, of course, a moose is taking his time crossing the highway in front of you, just daring you to try and honk at him to move faster (it doesn't really work.)

In any case, this moosie could just possibly be the moose I showed you before. But he was getting really rambunctious. Enough that I was considering he could be a less-sober cousin to Buzzwinkle the drunk moose I mentioned. He would grab a bite from the tree above him, and then hop and prance around the yard a bit.

Now, if you think of a deer prancing, I'm sure the sight is lovely and delicate. Moose have never, ever, ever been delicate. A full-grown, prancing moose is like a full-grown prancing Buick in your yard.

There were actually two examples of good moose safety:

1) A gentleman living in this home. He waited in the car for awhile, idling in the driveway. When moosie walked away a bit, he cautiosly got out, nearly making it to his door. Then moose snapped at the tree, and began dancing around the yard (this is actually the first time, in all my moose-watching days, I have ever seen a full-grown moose act this way.)

The gentleman promptly abandoned his try for the door and ran back behind his car. The moose stared, and then looked toward the street. As soon as he did this, the gentleman jumped over the chain link fence to the nieghbors backyard. I am presuming (hoping) he found home base.

2) The gentleman walking on the street. I will give a distant high five to this guy for braving this weather in the first place. My car died the morning after this picture, because of the 35-below-zero temps in my neighborhood. (No, I didn't plug it in. Yes, I know that was stupid.)

He was pretty bulked up for the weather, and cautiously watching the moose as he walked on the other side of the street. As soon as the moose started thrashing around, this guy BOOKED IT. I was impressed with his speed, especially regarding his bulky gear. He moved all the way up a nieghbor's driveway, and when the moose seemed to be moving towards the street, the guy actually ran to the doorway and rang the doorbell.

I moved my car in between the moose and the guy, just in case, but moosie just went a little nuttier. The neighbor opened the door and let the guy in, and they both were peeking out the window when I finally left. This guy gets my safety award of the year. Many are not willing to choose inviting themselves into a strnager's house over possible trampling, and so high marks for bravery and smarts.

I don't know if the moose was drunk, like Buzzwinkle, or just going stir-crazy with the cold like the rest of Alaska. I guess if I had to be outside all the time right now (I think it's about -25 now) I would be jumping around like crazy too.
Posted by Writing Raven at 10:50 PM