When the red man can get ahead, man! 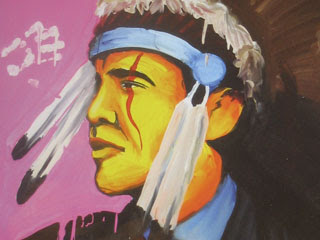 Painting beside, from Indian Country Today: A Native American artist created a work of art entitled "Barack Black Eagle: He Who Helps People Throughout the Land," which was displayed during the inaugural festivities. Obama was given the name by a Crow family who adopted him into the tribe when he visited the Crow Nation in May 2008.

I couldn't sleep - I was too excited. So I'm going to leave off the Obama inauguration post until tomorrow. But amongst all the celebration, it was nice to take note of some of the Native happenings too. I couldn't find any coverage of the American Indian Ball, though.

At the same time, however, she said tough issues remain in Indian Country, including her native Alaska where environmental problems, climate change and an economic downturn have led to skyrocketing unemployment rates of more than 80 percent in some villages, threatening the livelihood of her communities.

"A whole lot of our villages are dying," she said.

RezNet also covered some of the Alaska Native and American Indian performances, including the Yaaw Tei Yi Tlingit dance group from Juneau.


a pre-inaugural summit hosted by the National Congress of American Indians.

Indian Country's coverage focused a bit more on the mentions of Native people in his address (which there were none,) as he gave a "shout-out" to Native people on election night, as well as the Lincoln memorial party the other night, but still, a few nice nuggets of info. Indigenous people around the world can have a bit more hope tonight!

They also picked up on what our household found kinda funny - following a mostly very poignant benediction, Rev. Joseph Lowery ended with:

“Lord, in the memory of all the saints who from their labors rest, and in the joy of a new beginning, we ask you to help us work for that day when black will not be asked to get in back, when brown can stick around. ... when the red man can get ahead, man; and when white will embrace what is right. That all those who do justice and love mercy, say amen. Say amen.”

Celtic Diva got some pictures from Patti Higgins (AK Dem chair, who I will be forever grateful to for getting me into see Obama at the Democratic National Convention) of the Alaska float in the parade. The Barrow group looks... very ALASKAN!! 907 represents!!

KTUU also had some coverage of the two Alaska bits of the parade - the Colony marching band and the Barrow group.

The Green Inaugural Ball also had a nice little bit of benefit for Native people in it:

The Green Ball, of course, was billed as carbon neutral. The emissions generated from the electricity used at the event were offset by buying emissions-reduction credits from Native Energy, which supports Native American, farmer-owned, community-based renewable energy projects.

Posted by Writing Raven at 8:13 PM

What a wonderful day.