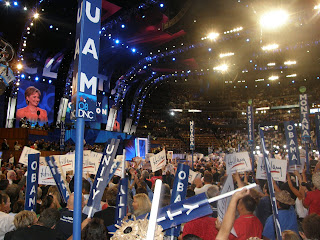 For the two of you that don't know, Hillary Clinton addressed the Democratic National Convention crowd tonight (technically last night, at this point.) I've never heard a longer standing ovation!

Honestly, I just wasn't that much of a fan of the whole "Clinton for President" bid. But after hearing her speak, I could see her making a real nice VP. Her words were both moving and forceful - "high expectations" is a bit of an understatement for the speech. But pretty much everybody leaving there that night was impressed with some aspect of the speech - whether it was specific words, rallying calls, or the woman herself. 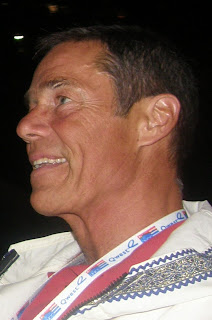 Governor Tony Knowles -
"She's a powerful political symbol and leader... It was a seamless transition from her to Obama."

I spoke with Alaskan Clinton delegate just before Hillary took the stage. When I asked her how she felt about Hillary addressing the convention:
"Thrilled... I expect her to bring unity to the party, to the decision. I expect her to blast McCain, and the things he's doing. I think she'll get people pumped up - she's a great speaker. And let's face it, she's a hero to the American woman... I just believe that this is a good thing."


Representative Lindsey Holmes:
"I thought Hillary knocked it out of the park."


After hearing the speech myself and talking to so many people after Hillary spoke, it amazed me to come back to where we were staying and hear so much about delegates that were unhappy. In my limited view, delegates unhappy enough with the way things went to not vote for Obama were the extreme exception - not at all the rule. In fact, the only delegate I saw that was still adamant about Hillary for President was on TV.
Much more the case was the conversation about how the speech was exactly what was needed. From the convention floor as it was cleared, from the long walk to the buses, in the long wait for the buses, and on the bus ride back - Hillary supporters were thrilled, and Obama supporters were impressed. Even somewhat cynical news crew members around us were grudgingly ackonwledging that it was exactly right.
The only flaw I can see is that she gave the speech on Tuesday - there's two full days of speakers who are going to have to compete with that, including President Clinton!
Posted by Writing Raven at 12:45 AM

It still to me seems like she is just running for election, yea she was behind obama but in a way that put her out front. I wouldnt make her my vp in fear she'd kill me while i slept

I expect Hillary Clinton to put a Universal Health Care bill on President Obama's desk sometime during the first year of his term. I expect President Obama and Vice President Biden to develop a crescendo of grassroots support for that bill. And I expect Senator Begich and Representative Berkowitz to support the bill, on behalf of the state with the worst health care cost problem. You could be watching the teamwork required for that accomplishment at its inception, Raven.