Catching up on the convention 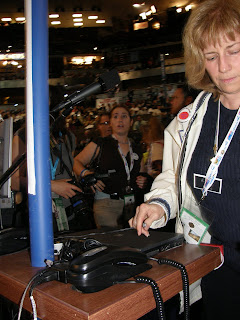 While we're watching tonight's coverage, I'm trying to catch up on the sheer amount of information and visuals from last night. Tonight has already had its share of surprises, but Celtic Diva is blogging live from the convention tonight and can fill you in on that.

Though one of the first surprises was that Alaska still gave three votes to Clinton. From what we had been hearing, this was not going to happen. Linda's on the case, so keep a lookout on her blog. This pic is of Patti Higgins at the Alaska information station - where Alaska gets its information from some mysterious place within the convention, as well as where Patti, and Alaska, cast Alaska's votes for Obama tonight.

Hillary, of course, the other surprise, but I'm sure that will be analyzed in about a thousand different ways on as many different channels, so pick one to see it all go down!

There was an excellent bit honoring women tonight, noting that over half of the delegates for the convention are women!
This is also the case for the Alaska delegation. The Alaska delegation is represented by a majority women, and is This is last night's women's caucus Barack-in the Vote. 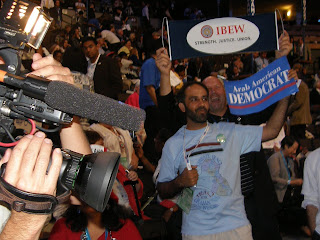 Nobody's kidding when they talk about the most diverse convention in history. The majority are actually minorities, not to mention the majority of women. I'm still surprised when I see some of the younger delegates, too. They barely look old enough to be out of high school!

I spoke with a young delegate from Minnesota who talked with a great amount of knowledge about who and what she was representing, and had a lot of energy for everything she wanted to accomplish.

A reporter from a daily Denver newspaper, Rocky Mountain News, who's interviewing me. The bloggers are getting a lot of attention. On yet another historic venture for this convention, the bloggers are representing in huge numbers!

This reporter actually interned at the Anchorage Daily News, before going on to quite a few other papers, and now Denver. He was there at the tail end of the whole Times/Daily News scuffle.


Former DNC chair Terry McAulliffe was a bit of a celebrity at the convention. He was being followed around by cameras wherever he went, but he made sure to stop by the Alaska delegation to talk about Mark Begich.

He knew the primary was the same night, and spoke with a few of the delegates, mostly cheerleading Alaska on to "Get that Senate seat!" 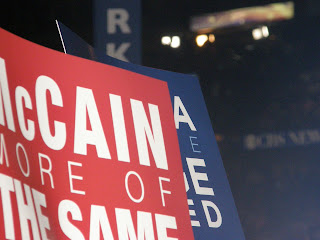 If you've wondered at all about all the various signs you see being held up in (kind of) unison, they get handed out by the whips shortly before the person you're supposed to hold them up for. It is not at all a spontaneous process - in fact, I think they've complicated it to the utmost!

It's not just handing a sign to wave during a general period. The signs will get handed to the delegation, and they'll say something like, "Wave this about four minutes in, after he says this key word." Or, "Wave this one when this congressman says this word, but don't wave it while he's waving this."

The red and blue signs saying, (blue) "Obama - the change we need" and (red) "McCain - more of the same" were the most complicated, as far as I could tell. The delegates were supposed to wave them only during a specific speaker, and the red ones were only after he said something negative (McCain), the blue if he said something positive. Only sometimes that was switched, so there were keywords to listen for. Most everyone kind of gave up. 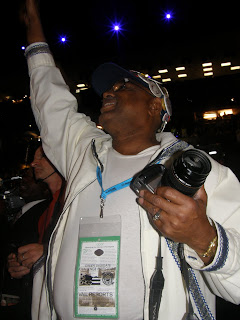 Alaska stayed pretty on top of it, though, in part due to the efforts of Alaska delegate Cal Williams to keep everyone on task. He would listen to the speech, and on keywords shout, "Red! Red!" or "Blue! Blue!" Every once in awhile he would spot somebody waving the incorrect sign at the wrong time, "You! Not blue! Red! Red!"
I must say I was having a hard time paying attention because I was laughing so hard. 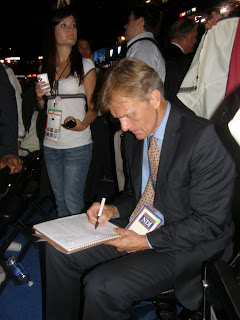 One of the other people highly amused by these signage efforts was this gentleman, Ambassador Friis Arne Petersen of the Royal Danish Embassy. He would even try and help, chuckling as he heard a keyword and tried to get the Alaska delegate's attention (yeah, we missed a few ques.)
I'm not totally sure what Ambassador Petersen was doing - he did a whole lot of note taking, and listened in on the speeches and the goings-on around him. We talked about Greenland, and similiarities between Greenland and Alaska both with environment and people (Inuit, Inupiaq, etc.) I believe this was an environmental mission of his, but I can't help but think he was taking notes on the craziness of a Democratic convention and reporting back about nutty American politics (like we'd disagree.)

Posted by Writing Raven at 3:04 PM

I've just started reading your blog, and I love it. Thank you for posting--I'm learning so much!