Enough with the commercial 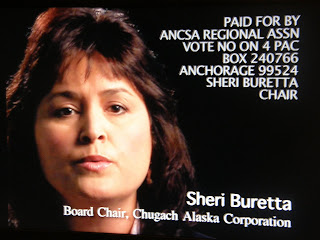 I love watching the Olympics - especially when you get to see Phelps breeze through history. What I don't love watching is the ANCSA Regional Association commercial. It takes some historical strides backwards for Alaska Native people.
I am not in support of the Pebble Mine, but I also think that we tend to get into other region's business a bit too much. Alaskans hate it when the rest of the U.S. tries to assert its will on Alaska - but we do it within our own state frequently enough.
It is not the support or opposition that rankles so much. It is the selling out of Native values that really gets to me.
The first statement: "For Alaska Natives, protecting the environment has always been a priority."
In one sentence, the leaders of most of the ANCSA regional corporations took a giant leap into exactly what we fight against every day. Although I think that most Alaska Native cultural groups valued and respected the land itself historically, this cannot be a statement in which we hold our heads high in today. The ANCSA leaders here made a sweeping generalization not based on fact, but on the stereotypes we don't want non-Natives to buy into.
My grandparents take excellent care of the land. If they go into "nature," they tread lightly. When gathering subsistence, they don't take more than they need, or too much from one place. They recycle. They throw chemicals away correctly. They drive as little as possible. They truly respect the earth.
But to say that the corporations make the environment a priority is simply not true. A corporation that clears vast swaths of land for development, clearcuts miles of trees, blasts holes in the earth for mines absolutely does not have the environment in mind as a priority. Profit is a priority, and it certainly doesn't came anywhere near traditional values. I was in a talk once just for Native employees of corporations - how to navigate the seeming contrary values of Native culture and corporate culture.
The trouble with criticizing Native corporations is that many people will read what I am not saying into this. For any other corporation, profit is supposed to be the top priority. Can you imagine what Nike shareholders would say if Nike decided profit was not the top priority anymore? The corporations are just doing what they were set up by the U.S. government to do, and what shareholders prefer they do.
But taking corporate leaders and twisting them into cultural leaders is what is wrong with the picture. The message that "Alaska Natives take care of the land and therefore we're experts on whether this will be good for the earth or not" - it is dangerous and irresponsible.
The CEO's and leaders of Calista, Doyon, Bering Straights Native Corp., Koniag, Chugach, NANA, Arctic Slope Region Corp., CIRI and Ahtna can support or speak out against whatever initiative that could potentially hurt their corporation's financial interests. That is, after all, their jobs. There is certainly an argument to be made about profits and jobs hanging in the balance.
But back off the generalizing and playing into Native stereotypes. Our corporate leaders need to be honest with why and what they are doing.
In this case, they don't speak for me.
Posted by Writing Raven at 10:47 PM

Since the bottom line in corporate culture and motivation is profit, all else comes secondarily—including reasonable treatment of human beings. That's the intrinsic problem with these economic constructs. Stereotypes? Heck, if they sell goods and help the company make a profit, use 'em! Who cares?

Well, people care. Corporations don't. And that is the basic problem with giving the latter the rights of the former, such as free speech, financial support of candidates or initiatives, etc. This ad is yet another example of why some of our legal framework around corporations needs to be changed.

Thanks for skipping my corp in your rogue's gallery! LOL

I'm not sure what my neighbors here in Kodiak think of their corp being named twice though....

I think you're missing another...


All that aside, you make a very good point, as does Deirdre.

I meant to take off the second time that Koniag was listed (thanks for the catch!) - but it is actually because two Koniaq leaders were on the commercial. We went through the whole commercial on "super slow" mode, listing each leader, because we wanted to see which corporations all participated (mine didn't). The nine listed participated in the commercial, and Sealaska (my own corp.), the 13th Region, Bristol Bay Native Corp. and Aleut Corp. did not participate (as far as I can tell).

Okay, update on THAT. It is the same Koniag leader twice who speaks.