Both funny and frustrating today 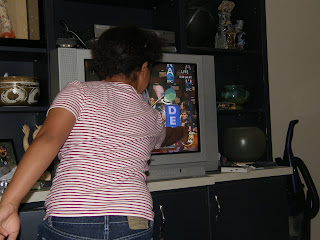 Is Morrigan really that interested in Alice Germond and Nancy Pelosi?

No! She just spotted her mom on CSPAN!

Alaska is cast most of their votes for Obama (3 for Clinton.) Did everyone check out the button blanket!? 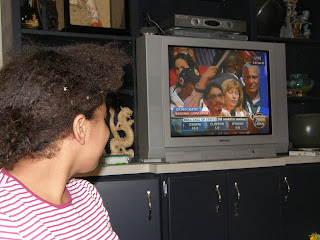 Morrigan just got a prepaid cell phone today, and is already banned from calling her mother anymore. She called her for the first time when they were about 30 seconds out the door.

Morrigan, at least, is very anxious about this vote. She's concerned, and wants to make sure Obama gets the nomination. 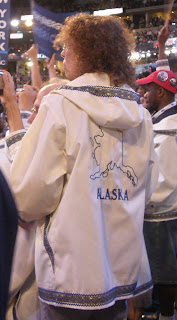 The Alaska delegation has been getting a lot of attention for thier kuspuks, and are pretty easily identified by them, too. Although I do not wear one of the "official" kuspuks, I wore my own yesterday, and was stopped a few times - everyone knew immediately I was Alaskan.

Sure beats those funny hats.

As we settle down to "watch for Morrigan's mom" (Celtic Diva will be covering the live blogging from the convention today,) she got a kind of funny look as the priest gave the opening prayer. In his prayer, he prayed that everyone would "bow their heads in thanksgiving" for bringing everyone together.

Says Morrigan, "What does Thanksgiving have to do with any of this?"

Morrigan sang every word along Moore. And I think a few additional words. She's actually still kind of singing.

Along with laughing, I've been doing some cringing as I check on the Alaska political scene. For the non-Alaskans checking in, Alaska held the primary last night.

Mayor Mark Begich with 84% of the vote! Yea!

Sen. Ted Stevens with 63% of the vote

(A lot of people here are surprised that Stevens pulled off the primary, but Alaskans pretty much knew that there was no way he was going to lose the primary. The general on the other hand... Go Begich!)

Ethan Berkowitz with 53% of the vote

Diane Benson put up a great showing with 37%, and everyone down here in Denver is proud of her!

Too close to call!


With all but two precents reporting as of writing this, only 152 votes separate Congressman Don Young and Lt. Governor Sean Parnell. There are still several thousand absentee ballots to be counted, so this will be drug out for awhile.

The ballot measures, I won't even talk about.
Posted by Writing Raven at 1:18 PM