I tried to blog last night about the last night of the Democratic National Convention - Barack Obama's acceptance speech - but literally fell asleep at the keyboard. I jerked awake in time to type an "I'm tired" message, and slept until abruptly awoken by Celtic Diva about the whole McCain VP thing. We knew McCain was going to announce his running mate today, but I didn't think any of the likely picks was going to make much of a difference. Of course, that's before they picked our Governor, Sarah Palin. I've posted plenty (and I'm sure there will be more) but what I experienced this past week, and last night, goes so far beyond this desperate VP pick.

I will be posting multiple times about this convention, and will cover Barack Obama's part of the night, and the honoring of Dr. Martin Luther King, Jr. on the 45th anniversary of his "I Have a Dream" speech, on their own posts. It was too incredible to try and even capture in a blog, but I'm going to attempt the impossible anyways.

When we heard that there was no way we could do a live blog from the last night (there was no hookups,) I was wondering if it would make any difference being there. From my time at the Pepsi Center (the venue for the first three nights of the convention,) although the experience of being there was incredible, being there in-person with all these great speakers, bumping elbows with some of America's best and brightest (or sometimes just famous,) you miss quite a bit about the speech itself, mostly due to audience applause, that you would see better on TV.

There is also a bit of surrealism, in that they doll up the podium area so much, with such great lighting, that you kind of feel like you're watching TV anyways. Not quite touchable, though you're just feet away. I was glad to say I could be there for Hillary's incredible speech, feel the energy of the crowd, and really be impressed with her words. But I still had to watch some of her speech online, to get what I missed from the audience applauses. Would it really be better to actually be there when Obama accepted his nomination?

The whole thing, start to finish, I will remember forever. Though we were waiting for eight hours, though it was the longest line in history, though we had seriously nosebleed seats and were seated behind the podium, though it was hot and I think at some point I was suffering from altitude sickness - I would do every minute again, ten times over, just to have been there for this amazing, incredible, humbling, historic... well, not enough adjectives - moment.

I believe there was a lot about the line on television. We got a bit of an abrupt wake-up call after we got off the ridiculously crowded train (pics and posts on that ride later!) a stop earlier, because the line went all the way back to the further station.

My sister says the news reported the line was six miles long, and that is very easy to believe. We went earlier enough it wasn't that bad for us - probably about a mile long, and we were in line for a little over an hour and a half. There were some people who literally got in the door minutes before Obama's speech. 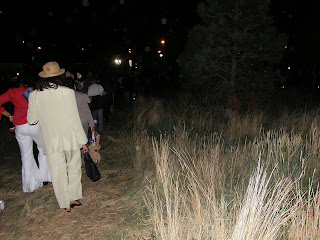 This is actually a shot from after the speech. We were lost in the wilderness of Denver. Didn't even know there was wilderness down there - but we found it! This was a grass field until thousands of speech-goers trampled through, in what I was slow to find out was not a clear direction. There were so many stations and roads cut-off by the Secret Service that even Denver-ites didn't know where to go to get home.

More on that, and the adventure of battling Denver creatures in the woods, later.

One of the reasons the line was so long - all the security checks. Although there wasn't quite as much security as I thought (it wasn't even as much as you'd expect at an airport,) there was about a million checkpoints.

One not-so-airport part of the security measures were the Secret Service - snipers!- on top of the stadium. They were staioned all around the top, and though sometimes they seemed kind of lax, the pair taking turns, they were extremely alert when some of the big names - Al Gore, Joe Biden, and of course, Obama - were speaking. They'd be looking both in and out of the stadium with binoculars, toting around big rifles.

The speeches have started, so why are huge sections of the stadium empty? If you look in the back, they're in the crazy long line to get in. The place was standing room only by the end, but it took right up until Obama gave his speech to get there.

The jumbo-tron reads "In the event of an emergency: Move away from the stadium."
Thanks for the tip.
There was a long presentation about just what to do in the event of some "emergency." Seeing as there's no earthquakes in Denver (so said our hosts,) it made me a little nervous to think of what those emergencies could be.
Of course, being at the tippy, tippy top of the stadium, when they explained the long process our section would have to go through to to get out, one of those seated by us commented, "So basically, if you're in this section, you're dead." But what a way to go!

Shawn Johnson! Yeah! She just did the pledge of allegiance - didn't speak outside of that - but the crowd was with her! The recent gold medalist also was one of my favorites for simply doing her part facing us. We were directly behind the podium, so I have a lot of pictures of butts and backs!
It was actually kind of neat getting a totally different perspective. We saw some of the behind-the-scenes stuff, and it didn't feel like you were just watching something on TV.

One of the best renditions of "Star Spangled Banner" I've ever heard! Really, Jennifer hudson was awesome! She put a little of her own spin on it, and her voice was beautiful.
To top it off, when the line "...and the rocket's red glare/the bomb's bursting in air" came up, they let off these "red rocket" fireworks off and scared the crap out of all of us. Yeah!


Because we were directly behind the podium, we could see the teleprompter and every word the speakers (and even singers) were supposed to be saying. And not everyone stays on - sometimes they mess up big time! But I won't tell who... much! :)

Morrigan waving a flag. Everybody who wanted one was given an American flag, and later an Obama "Change" sign.

When we told her we were going to be sitting in the nosebleed section, she looked horrified:
"You mean my nose is going to have to bleed!?"


Go Alaska! The "guest pass" Alaskans all sat in the same section way up top - or should I say way up north? :P Sorry.
I don't know that our cheer when they mentioned Alaska was all that heard - but we sure did our best!!

Oh, those creative Alaskans! They're taping together sticks from the American flag to hold up the big Alaskan flag. One of the security measures beforehand was that you couldn't bring in any sticks or signs.


John Legend and will.i.am! Yeah!
They recreated the Obama "Yes We Can" song from the viral video that it seems like everyone has seen. If you haven't, or just want to enjoy it again, check it out on YouTube. Best video ever!

I had just seen Sheryl Crow at the "Green Sunday" opening of the convention, but this was a little bit different tone. The concert was more... well, a concert. She was a bit more serious in this, even opening with her song, "A Change Would Do You Good." The second song she did, inspired by the Dalai Lama, I didn't catch the name to. It put everyone in a pretty serious mood, reflective.

This sign language guy was jammin'!
He was fun to watch. The other sign language lady was kind of bopping and swaying, but this guy was gettin' down with the music!


Stevie Wonder rocked the house!! While the other acts made you think, got you inspired - but Stevie Wonder got everyone on their feet and moving!
This was funny - the VIP's and speakers come out of these little doors underneath the podium/walkway. During the other performances, they stayed clear. But when Stevie came out, all these senators, congressman and other VIP's poored out from under the stage to catch his act.

The sun setting as Al Gore addresses the crowd. Fitting, as he spoke about Thomas Jefferson's assertion that sun energy would be the future.

It was nice to be able to see the granddaughter of Dwight D. Eisenhower... but she kind of lost the crowd. It was hot, we had already listened to a lot of speeches, and she was kind of all over the place. She had good remarks, but got a little overshawdowed by... well, pretty much everybody.

What an incredible night! Once the whole crowd was in, the energy of the place was just amazing. I don't know how many spontaneous chants broke out ("Yes We Can!" "Fired up - Ready to go!" "O-Bam-A!") but it was easy to get started a any provocation.

I don't know how well they played on television, but the "average Americans" chosen to speak were major crowd favorites. Their personal stories touched more people, I think, than a lot of the big-time speakers.
At one point, one of the average Americans - Barney Smith - started getting cheers by name, "Bar-ney Smith!!" Even Gore didn't get that!

I'll be posting lots, LOTS more about the convention, especially about Barack Obama's acceptance speech, and the Dr. Martin Luther King, Jr. tribute. I was also able to attend the last breakfast meeting of the Alaska delegation, and will post about that.